Villains Wiki
Register
Don't have an account?
Sign In
Advertisement
in: Article stubs, Articles under construction, Male,
and 19 more

The Return of Jafar

Defeat Aladdin and his friends (both failed)

Abis Mal's Thugs are minor antagonists in the 1994 Disney sequel film The Return of Jafar and the Aladdin TV series. They are the henchmen and followers of Abis Mal.

Despite his obvious stupidity and incompetence as an antagonist, Abis Mal has his own gang of various sword-wielding thieves who do his bidding, even though the majority of them are clearly smarter and more competent in crime than he is. In the 1994 sequel film, they are introduced as traitor minions who tire from their leader's stinginess, since Mal was influenced by the greed of gold and was relying upon his thugs to do his jobs. In the TV series though, while continuing to follow his lead, they appear to be more controlled under his authority whenever they take orders from him and occasionally seem to fear him. One episode even reveals that Mal tortures or kills his minions whenever they fail him.

The Return of Jafar

Abis Mal's Thugs first appear when they are seen by the greed of gold and was relying upon his thugs to do his jobs. They also attempted to exact revenge on Aladdin after he stole back their stolen loot on the streets of Agrabah (even reminding their leader of who he was in minor annoyance when he failed to remember who he was), although they were ultimately forced to flee after Iago not only sent them flying into a cart of eggs, the guards also recognized them, or rather, their leader for his prior thefts. They eventually tried to kill him at the well both for the failure and for his stinginess, although his unknowingly summoning Jafar from his lamp forced them to flee.

Although continuing to serve under the authority of Abis Mal, as well as that of their second-in-command Haroud Hazi Bin (who was completely absent in thee movie of their introduction), the menagerie of thieves appear somewhat infrequently in the TV show compared to their boss. When seen with him, they are shown to be much more obedient and somewhat more loyal and even fearful to his command, with only two firm exceptions at best. During their spare time without Abis Mal, they are usually seen at the Skull and Dagger, a local diner for Agrabah's criminals, often referred to as a "den of thieves" by Mal himself.

Tornadoes were raging through Agrabah, leading everyone to believe they were wind demons, but Aladdin believes they are only thieves, as he sees one taking a pile of gold off of a stand and another stealing a man's gold, jewels, and clothes. Betting with Razoul and Fazal that he could prove the tornadoes aren't demons, Aladdin, Abu, Iago, Genie, and Carpet confront them and discover that they are Abis Mal's thugs. The group also found out that they were using Roc feathers to turn themselves into tornadoes. When Genie comes out of his lamp, and tells them that the "wind demons" went north. They see the three whirlwinds and fight them. When Genie blows a huge gust of wind that sends the attackers away, three thieves fall out of the propellers, making everyone realize that they're Abis Mal's men. When Aladdin tries to stop the thieves, they grab golden feathers to form whirlwinds and escape. At the hideout, Abis Mal berated his thugs for losing to Aladdin and planned to have them killed, despite Haroud's advising against it. Abis Mal then boasted about how he'd use his feather-wielding thugs to rule Agrabah. Mal and his gang attack Agrabah the next morning, revealing their true identities to Razoul and Fazal. Aladdin was able to stop several of Mal's men with a tarp, a rope, and a snake, but Abis Mal and his remaining goons trapped them in a whirlwind and prepared to cut them to ribbons with their swords. Suddenly, Genie and the baby Roc arrived with the mother Roc, who blew Mal and his men away.

After using the Blue Rose of Forgetfulness to erase Jasmine's memory of who she is, Abis Mal, Haroud, and a group of their goons infiltrated the palace and imprisoned the Sultan and the guards with Jasmine's help. However, Jasmine betrayed Abis Mal and had him imprisoned as well, saying no one as incompetent as he could be her father. Aladdin, Abu, Iago, Genie, and Carpet then barged in and Jasmine ordered them to be executed immediately. Genie fought the goons while Carpet, Iago, and Abu dealt with the brainwashed Rajah. Aladdin and Jasmine fought, Aladdin trying to convince Jasmine of who she really was but to no avail. Aladdin was forced to flee but remembered what he'd forgotten: the anniversary of his Jasmine's first date. When Aladdin told Jasmine about this, the rose wilted, breaking the spell. Abis Mal, Haroud, and their goons showed up, but Genie sprayed them with the essence of the rose, making them forget who they were. Iago and Abu told them that they were their attendants.

On Founder's Day, Abis Mal and two twin goons stole a magic hourglass from an old fortune teller. The hourglass allowed them to travel in time, causing Abis Mal to change history so that he ruled Agrabah. Aladdin and company followed him through the time vortex to when Agrabah was first founded by a group of nomads. Abis Mal convinced his ancestor, Abnor Mal, to get rid of Hamed, Agrabah's founder, and Jasmine's ancestor, and who found Agrabah himself. Abis Mal sent Hamed to prehistoric times, causing Jasmine to vanish. Aladdin was able to rescue Hamed, just as Abis Mal and Abnor were forcing the rest of the nomads, as well as Abu and Iago, to build Agrabah. When the two saw Aladdin and Hamed were back, they fought over the hourglass and broke it, creating a massive time vortex that sucked in Abis Mal, Aladdin, Abnor, Hamed, and Abis Mal's goons. The six men fight, adopting different outfits and weapons from different time periods until Genie was able to contain the vortex and bring them back. The gang then returned to their own time, Hamed now motivated to found Agrabah and Abnor sent to live in the desert as an outcast, which is probably why Abis Mal became a thief. While the twin thugs likely returned to present Agrabah, Genie revealed he had sent Abis Mal in the same prehistoric times Hamed was sent to, being chased by a saber-tooth tiger (the same one that tried to devour Aladdin and Hamed).

Whilst Abis Mal and Haroud bought a candle called the Candle of Magma from a green-skinned sorcerer, their followers were among the many thieves at the Skull and Dagger eating and socializing. A disguised Aladdin tried to steal the Candle, only to have his cover blown by Abu and Iago, who tried to rob a big fat thief named Akbar. Abis Mal recognized Abu and Iago and had his men attack Aladdin. Aladdin was able to elude the thieves and tried to take the Candle again, only to have Haroud cast the 'Curse of Clumsiness' on Aladdin, making him unbelievably clumsy as the three minions who had continued chasing him returned. Abis Mal and Haroud were able to escape while Aladdin barely escaped from their gang of thieves.

Aladdin and the King of Thieves

Some of the Forty Thieves who work for Cassim resemble many of Abis Mal's henchmen, though it is unclear if these are the same characters. 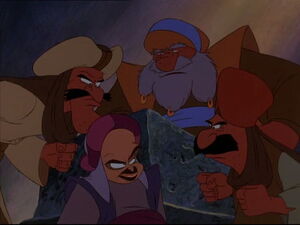 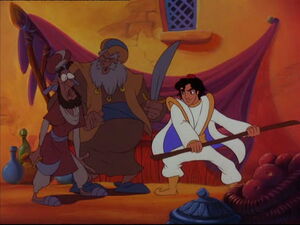