The Abominable Greench is a seasonal monster that appears in World Of Warcraft during the Christmas-themed holiday event known as the Feast of Winter Veil, every year this abnormally large and powerful Yeti steals the Smokeywood goblins supplies and patrols a stretch of land across the region of Hillsbrad.

The Abominable Greench is faced by adventurers who seek to retrieve the Smokeywood supplies - although a rather intimidating beast he is actually not that hard to deal with and can easily be taken down by experienced players or higher-levels.

During Winter Veil 2011 the Greench returns, this time he has grown in both size and power and has employed a group of Leper Gnomes to do his bidding. Along with this he has kidnapped Metzen the Reindeer and stolen even more presents. This time heroes must work together in large armies to stop the Greench if they are to save Winter Veil.

The Abominable Greench is a fusion of two popular villains, the Abominable Snowman (aka Yeti) plus the fictional Grinch - a Christmas-hating monster made famous in the book and cartoon of the same name. 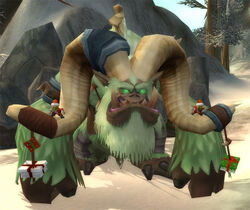 Add a photo to this gallery
Retrieved from "https://villains.fandom.com/wiki/Abominable_Greench?oldid=2454862"
Community content is available under CC-BY-SA unless otherwise noted.