Abominable Snow Monster of the North

To eat Rudolph and anyone else (formerly).

The Abominable Snow Monster of the North (or "Bumble" for short) is a giant yeti that lives in the North Pole and has a very loud ferocious roar and the main antagonist in the 1964 Rankin/Bass special Rudolph, the Red-Nosed Reindeer and a major protagonist in its 2001 sequel. In the 2001 sequel, he is Yukon Cornielius' bumbling sidekick. Yukon calls him Bumble.

When Rudolph was growing up, his father told him that the snow monster hated Christmas, had giant razor-sharp teeth and eats anything. Months before Christmas Eve, Rudolph and Hermey the elf ran away and came in contact with the Abominable. He chased them towards a frozen lake, where they ran into Yukon Cornielius. The trio jumped on a floating piece of ice and the Abominable jumped in but could not swim and so they managed to escape.

Rudolph returned to find that his parents have been searching for him and that they have been captured by the Bumble. Rudolph went to Bumble's cave and challenged him but was knocked out with a stalactite grabbed by the monster, who then laughed sadistically at Rudolph's misfortune. Hermey and Yukon found the cave and tried to rescue their friend. Hermey lured the Bumble out of the cave and Yukon pushed a boulder over the Bumble's head and knocked him out cold.

When the Bumble awoke, he noticed that all his teeth were gone. Hermey took them all out with his pliers. Yukon no longer saw him as a threat and started to fight the Bumble, who backs away cowardly due to him not having his teeth to menace the group with. Yukon and his dogs cornered him towards the ledge and they all fell off the cliff. Rudolph and Hermey believed they were dead and returned to Santa's workshop very sadly. Yukon and the Bumble survived the fall and returned to help Santa with the toys. With no more teeth, the Bumble became good and followed Yukon everywhere he went. 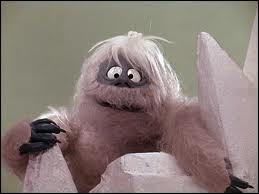 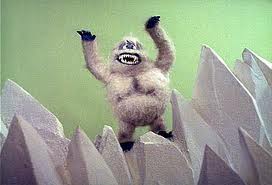 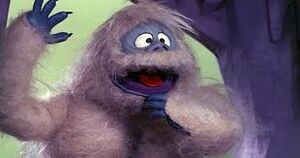 Bumble without his teeth 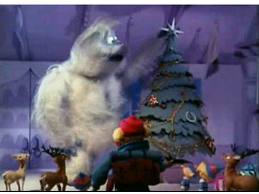 Bumble redeemed
Add a photo to this gallery

Retrieved from "https://villains.fandom.com/wiki/Abominable_Snow_Monster?oldid=2746668"
Community content is available under CC-BY-SA unless otherwise noted.