Steal the Helmet of Fate to become a true magician

Wannabe-Sorcerer
Abra Kadabra is a villain in the animated TV series Young Justice. He first appears in the episode "Denial".

At some point, Abra Kadabra, who was thought to be a magician, was proven a fraud by the Flash.

In the beginning of the episode he kidnaps Kent Nelson (Doctor Fate), grabbing him and teleporting away with him. He then tortures Nelson to find the location of the Tower of Fate. Klarion watches as Kadabra does so. When finding out that the Young Justice team is coming to the tower to look for Nelson, Klarion and Kadabra are able to enter the tower by simply following them. By using a necklace impersonating Fate's voice, they manage to continue their way up the tower. However, they soon get trapped inside the staircase and Nelson, who gets his staff back by help of Artemis and Kid Flash flees with the two - leaving Klarion and Kadabra trapped on the staircases. The two however manage to escape as well and Klarion follows Fate and Kid Flash to the top of the tower. Meanwhile, Kadabra takes on the rest of the team and strikes them down with his electric wand. However, Nabu - the Lord of Order who has taken control over Kid Flash- defeats Klarion and then takes care of Abra Kadabra. By use of his magic, Nabu strips Kadabra of his clothes. Shocked, Kadabra drops his wand which destroys the electric field trapping the team members. Kadabra is then knocked out by Superboy.

Abra Kadabra, who has been brought to Belle Reve Prison, is one of the men conspiring to break out. During the riot he and two other villains guard the control room for the shock collars. The three are attacked by Superboy and Icicle jr. and Icicle freezes Abra Kadabra. 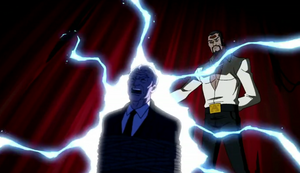 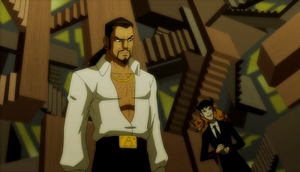 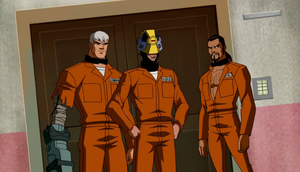