Leader of the Mexican Revolution

Abraham Reyes is a major character in the video game Red Dead Redemption.

With the addition of the Liars and Cheats DLC pack, Abraham Reyes is also a multiplayer character model that may be selected in the "Damnation" section of the Outfitter.

He was voiced by Josh Segarra.

According to Vincente De Santa, Reyes came from a wealthy family, a stark contrast from Agustin Allende, he who comes from a poor family. Later, at some point in his life, he became a guerilla fighter, and eventually a leader. After John Marston's venture to Mexico, and working with Allende and the Mexican army to find Bill Williamson and Javier Escuella, John meet Luisa Fortuna, who asks him to rescue Reyes from the wrath of the Mexican Army, John agrees, and Returns him to Luisa. As John helps return Luisa to Abraham he learns that she is blindly in love with Abraham who doesn't have the same feelings for her Abraham Reyes can't even remember Luisa's name and keeps calling her Laura. Allende, who we was secretly hiding Williamson and Escuella, and was presumably tired of John constantly not dying in the suicide missions Allende kept sending him on, decides to have John executed, however John is personally saved by Reyes and his men. Reyes is later captured again but escapes with the help of John, who was able to get revenge for Luisa who had been murdered by the Mexican army. John and Reyes' eventually track down Allende and Williamson, and at this point, either John can kill both Allende and Williamson, or Reyes will kill them both, or John can kill one while Reyes, kills the other, either way they both die. At the end of the game, Reyes is heard to have become a tyrant just like Allende. 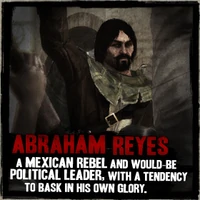