Hunt down and kill Dracula and all of monsterkind to make sure that the world is safe for mankind (formerly; failed).

Make peace with the monsters and realize he was wrong about them (succeeded).

He is a notorious monster hunter, he is also Dracula's former archenemy and Ericka Van Helsing's great-grandfather.

In the 19th century, Van Helsing started hunting down Dracula and his friends to free humanity from all monsters, but always failed. However, he has survived well into the present by adopting a robotic body which keeps his head and organs alive.

He is voiced by Jim Gaffigan.

Sometime in the 19th century, Abraham Van Helsing was born into a family famous for hunting monsters. Abraham's family believed that monsters were disgusting and dangerous. His family had already been well known throughout Transylvania for centuries by the time Abraham rose to the rank of monster hunter.

During the late 19th century, Abraham came across the famous vampire, Count Dracula. Abraham vowed to destroy Dracula and all of the other monsters. Despite his persistence and ambition, Abraham was never able to succeed in defeating Dracula. Eventually Abraham gave up trying to kill Dracula, accepting that no human could defeat Dracula, but his hatred towards him and other monsters never went away. Parts of his body started to die, forcing him replace them with mechanical body parts to prolong his life.

He would later have a family, though something down the line because Abraham was forced to raise his great granddaughter Ericka who stated she never knew her parents and he had raised her.

Throughout the film, Abraham orders Ericka to kill Dracula. At the end, however, when Ericka refused to do so, he decides to do it himself. By controlling the Kraken, Abraham was almost succeeded in doing this; however, Jonathan was able to defeat the Kraken using music. After he was saved by Dracula, Abraham admits that not all monsters are bad and redeems himself.

In the film, Abraham gives advice to Johnny on how he can impress Dracula, by telling him about an invention that turns people into both human and monster.

Unlike his original incarnation from the Bram Stoker novel, this Van Helsing is xenophobic, ruthless, ill-tempered, deluded, and utterly relentless in his ultimate goal; to destroy all monsters, who he hates with a burning passion. He goes to extreme lengths to accomplish this goal, even disfiguring his own body and prolonging his life to see an end to all monsters.

At first, he acted crazed and delusional, believing what he was doing was right and even being willing to sacrifice his great-granddaughter to do so. At one point, he casually remarked that his family legacy will die with him, though he did briefly show concern when his great granddaughter presumably fell to her death.

However, unlike the other main antagonists of the series, he was not completely evil or beyond redemption. Rather, he just believed he was truly doing the right thing and protecting humanity. However, when Dracula saved his life, he showed Van Helsing there was truly no difference between humans and monsters, and he redeemed himself. Abraham even admitted that he was wrong about monsters being evil. In hotel transformania, He is now a friendly if eccentric scientist and spends his free time studying both science and magic, and while benevolent, ultimately led to the movie's main conflict, albeit unintentionally. 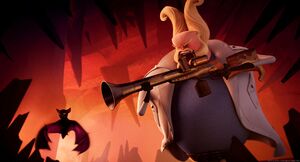 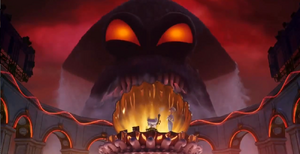 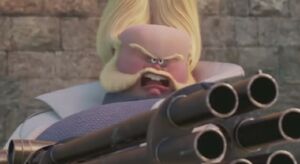 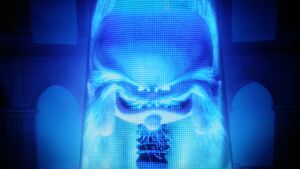