Possessing victims to be aggressive
Making the victim's friends a joke

Make SpongeBob lose his friends by being a jerk (failed).

The Abrasive Side is the titular main antagonist in the SpongeBob SquarePants episode "The Abrasive Side". It was originally supposed to help SpongeBob become more assertive, but as the episode progressed, it began to take over SpongeBob's body and dramatically affect his personality. Eventually, SpongeBob decided to seek help from his friend Sandy Cheeks who removed the Abrasive Side from SpongeBob and sent it back to the company from which it came.

Just like the original SpongeBob, he was voiced by Tom Kenny.

His mean personality drove all of his good friends away, and after SpongeBob realized what was happening to him, the Abrasive Side revealed that making SpongeBob lose his friends was its true intention, which hints that the Abrasive Side may be a sentient object. Ironically, all of the Bottomites reacted negatively to A. SpongeBob's acts of cruelty except for Squidward (who was happy because A. SpongeBob said he would never play with him anymore), while regular SpongeBob is generally liked by everyone besides Squidward and a few others. 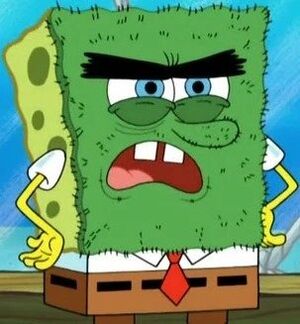 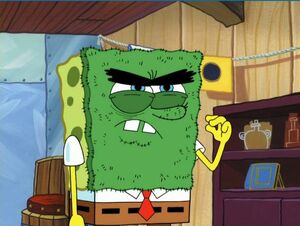 Abrasive SpongeBob's evil stare
Add a photo to this gallery

Retrieved from "https://villains.fandom.com/wiki/Abrasive_SpongeBob?oldid=3914068"
Community content is available under CC-BY-SA unless otherwise noted.