NOTE: This article is about the incarnation of the Absorbing Man from the Marvel Cinematic film series. The mainstream version can be found here: Absorbing Man.

Retrieve the Obelisk and kill anyone who gets in his way, especially S.H.I.E.L.D. agents (brainwashed; failed).

On & Off Villainous Fighter

He is a former boxer with the ability to absorb himself into any property he touches or touches him, and was brainwashed by HYDRA, becoming one of their assassins until he was freed by Glenn Talbot.

He is portrayed by Brian Patrick Wade.

Although Creel makes a brief appearance, he is seen as the opponent of a boxing match between him and Matt Murdock (Daredevil)'s father, Jack Murdock. This happens shortly before Jack's untimely death.

Carl Creel was a former boxer who used the nickname "Crusher" in his bouts. His high victory status came from his steel skinned gloves which made Creel a champion in the boxing sport. He then became a candidate for Index and John Garrett was sent to terminate Creel. However, Garrett then took the opportunity to fake Creel's death and trained him to become an assassin of HYDRA.

Creel was sent to infiltrate an undercover operation where S.H.I.E.L.D. agents Idaho, Isabelle Hartley, and Lance Hunter were attempting to procure from Roger Browning information where a Lv.10 0-8-4 was being kept. He then escaped through a window 25 feet from the pavement after the agents failed to shoot at him.

Later, Creel gave the 0-8-4 info to his employer who rewarded him by giving him a musgravite which he absorbed with joy. Creel was then demanded to capture Glenn Talbot who was, at the time, in the park enjoying time with his wife and child was then forced to tell the location of Obelisk. However, he was then thwarted by S.H.I.E.L.D. agents Skye and Melinda May and was then taken into military custody.

Creel escaped his cell easily and encountered Isabelle Hartley. She used the Obelisk to defend herself, when unaware of it, started to engulf her hand, giving Creel the chance to flee from her. As Idaho, Hunter and Isabelle tried to flee in an SUV, Creel then caused the SUV to tumble, killing Idaho and Isabelle, finally retrieving the 0-8-4.

However, Creel was also affected by the 0-8-4. At a diner, he accidentally incinerated a waitress who touched his arm. Creel then fled and attempted to seek objects that would remove the effects of 0-8-4 with little success. He was then ordered by Bakshi, Creel's HYDRA contact to give him the Obelisk and promised that a solution for Creel's problem will be solved. Later, Creel came across Raina who offered a Carbyne ring that would have solved his Obelisk problem. Creel refused and ran off, taking the ring with him.

He then met up with Bakshi, who told him a trigger phrase from the brainwashing method used on Creel and overtook the effects. Hunter, who survived the SUV attack attempted to open fire on him but Creel managed to deflect the bullet. Creel then pursued Hunter until Coulson used the "Overkill Device" to turn Creel into stone. He was later given to Talbot as a peace offering for breathing room. 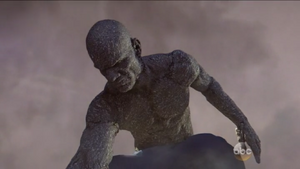 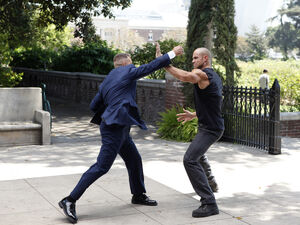 Creel during his fight with Talbot. 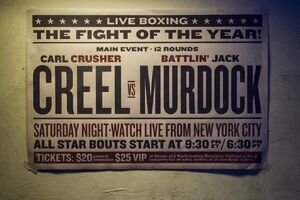 A poster of a wrestling match between Carl Creel and Jack Murdock. 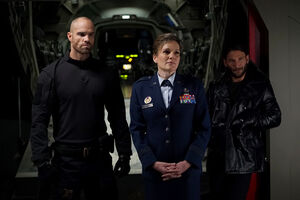