Thomas Orosco, also known as the Abstract Daddy is a minor antagonist in Silent Hill 2. A deceased character mentioned by Angela Orosco when she first meets James Sunderland at the graveyard on his way to Silent Hill, it is implied that his daughter Angela, murdered him for continuously abusing her, which made Angela eventually snap and kill him. He later though was resurrected in Angela's Otherworld as one of its monsters to torment her further.

Thomas Orosco is an aggressive, alcoholic lumberjack, who would often sexually and physically abuse his daughter while inebriating her throughout her life. He had a long history of violence and alcohol abuse. He would abuse his wife and son as well. Because of this, Angela began to resent and hate her father and felt that she could never forgive him.

Far from innocent, Mrs. Orosco was aware of the abuse and told Angela that she deserved it (however, it is unknown if these were Mrs. Orosco's true feelings or something Thomas pressured her into saying). It is implied that Angela's brother, influenced by their father, also abused his sister, the combined trauma of which eventually drove her to kill them both.

After Angela finished high school, she ran away from home in an effort to escape her trauma and abuse, but was found and forcibly brought back by her father.

A newspaper article found in the labyrinth reveals that Thomas was murdered around midnight. Angela achieved this by stabbing him multiple times in his neck and the left side of his torso in a fit of rage with a knife. There was evidence of a struggle in the room, implying that Thomas fought for his life, but was overwhelmed by his daughter. She did not hide her father's corpse, nor take his money, and fled the house.

When James Sunderland first encounters Angela in a graveyard, she tells him that she's looking for her mother and that she thought her father and brother would be there as well. However, Angela had murdered her father and brother prior the events of the game. This is similar to James, who tells her that he is looking for his wife, despite her being dead. It can be assumed that Angela either lied to James or repressed the memory of her murders.

Before James meets Angela again, he sees a photo left in Room 109 of Blue Creek Apartments which shows a mother, daughter, father, and son, in that order. The photo is torn in half between the father and daughter, as tis could have been done by Angela, showing that the abuse began when she was young. It is possible that the pictured man is Thomas. In the creased photo, the father appears to look young himself, wearing a checkered shirt. He has what looks to be a five o'clock shadow and short brown hair, while his eye color is not clear.

In the labyrinth area, a bloody newspaper article can be found stating that Thomas Orosco, a lumberjack, was stabbed to death in the neck with a knife and that police have opened a murder investigation. James then hears Angela's voice scream "No, Daddy! Please, don't!" behind a room covered with newspapers, which may symbolize Angela being forced to remember killing her father, and possible worry of the media attention surrounding it.

In Angela's Otherworld, James finds her sitting in a state of catatonia on the floor, cowering away from a monstrous version of her father known as Abstract Daddy, too frightened and terrified to move or stand up. On the fleshy walls of the room are holes with pistons making thrusting motions, akin to a penis thrusting in and out of a vagina or anus. These further evoke Angela's perspective of her being raped, a mechanical, emotionless, and inescapable experience.

When James Sunderland later defeats Abstract Daddy, Angela then thanks him for "saving" her, but felt that he needn't have to. 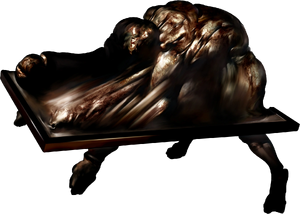 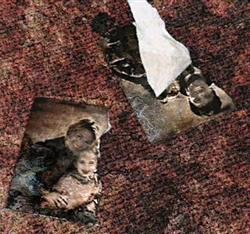 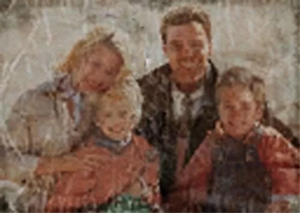 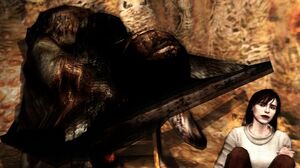