Member of the Ten Rings

Aid Raza and the Ten Rings in their goals (failed).

Abu Bakaar is a major antagonist in the 2008 Marvel film Iron Man. He is a member of the terrorist ring known as Ten Rings, and is in league with Raza Hamidmi Al-Wazar and Obadiah Stane.

He was portrayed by Sayed Badreya, who also played Rameses in Uncharted 3: Drake's Deception.

After Raza a secret agreement with Obadiah Stane, Raza arranged for Tony Stark to be capture during the display of the Jericho Missile. Bakaar is then assigned by Raza to detain Tony Stark (along with another prisoner named Ho Yinsen) in an attempt to goad Stark into building weapons for the Ten Rings. When Stark refused, Raza had Bakaar to beat up Stark until the latter agreed to do so, even when Hinsen is killed afterwards.

Raza then sent over Bakaar to the Afghan region of Gulmira (the home of Yinsen) to lead a group of the insurgents that were killing and trucking people out of the region. Fortunately, Stark freed himself from custody by making his newly constructed Mark III Suit and took down all of Bakaar's men. However, rather than finishing Bakaar off, Stark leaves him at the mercy of the Gulmira civilians, who are bent in making him pay for the trouble he has done.

It is unknown what happened to Bakaar afterwards, though he may be either detained for his crimes or killed by the civilians. 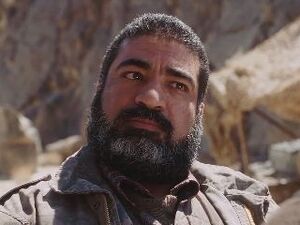 Retrieved from "https://villains.fandom.com/wiki/Abu_Bakaar?oldid=4236658"
Community content is available under CC-BY-SA unless otherwise noted.