Villains Wiki
Register
Don't have an account?
Sign In
Advertisement
in: Articles under construction, Article stubs, Outdated Articles,
and 21 more

He was voiced by the late Jack Mercer.

The Abusive Farmer is a cruel man who physically abuses his animals in many violent ways (from whipping his dog repeatedly to punching a cow in the face and hitting a chicken to the point its feathers fly off) and mocks Betty Boop for berating him over his brutal ways.

Eventually, Betty has no choice but to call Grampy, who captured the Abusive Farmer and locked him in an elaborate trap designed to teach him the errors of his ways: in the end, the Abusive Farmer is broken and declares he will change his ways, though it is highly unlikely that he stayed true to his promise. 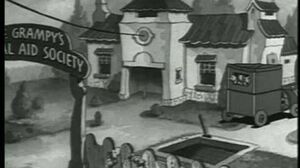