Destroy his own world and Arata world

Cataclysmic Destroyers
Abyss Trinity is the main antagonist of the manga series Trinity Seven and a cameo appearance in the OVA. He is a Crimson Magic King who tried to destroy Arata's world alongside his own in order to rebel against the system of destruction and re-creation. He is the biological father of Lilith Asami.

After his rise as a Magic King he obtained incredible powers and abilities, but he despised the system of destruction and re-creation that was manipulating him, he eventually visited the world of Arata but he found it boring.

In order to rebel against said system, he created Lilith and used her as pawn of destruction, he slaughtered his own Trinity Seven and then devastated his own world.

After the destruction of his world, he attacked the other world, but he was stopped by Arata who trained himself for the fight and stated that he has no choice but kill him because he knowed that he was going to destroy his own world.

Abyss tried to use all of his abilities to erase him, but he ended up defeated and destroyed.

Even after the destruction of his physical body, Abyss left his power as a Magic King and continued to live as spirit trough the King Weapon Caina in order to watch over his daughter Lilith.

In his first appearance he used a hood to cover his head, he then wore a cape and a claw on his right arm. 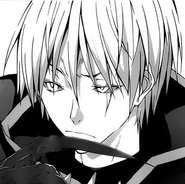