They are voiced by Imamura Ayaka and are drawn by Akira.

Abyssal Twin Princesses were humanoids who generally appeared as two flat-chested, skinny young girls with white skin, both of them with orange eyes in their damaged form, short hair, black oxygen masks and black fingernails and toenails. Other than this, they were mostly the opposite in colour. The left sibling had white hair, blue glowing eyes in her normal form, white clothes with a skirt that was mostly white but had some black, a white sailor flap, black arm chains and white stylized legwear. The right sibling had black hair, orange glowing eyes in both her normal and damaged form, black clothes with a skirt that was mostly black but had some white, a black sailor flap, black leg chains and two mechanical arms.

In all their forms, they were equipped with two 16inch Triple Gun Mount, a High-speed Abyssal Torpedo mod.2 and an Abyssal Submarine Floatplane.

The Abyssal Twin Princesses seemed to share a positive sisterly relationship because by judging by their voice lines and damaged form, they seemed to greatly care about one another and were protective. For example, they would become noticeably distressed at one another being attacked by the player’s fleet, when one of them would be critically damaged and when they would both sink. 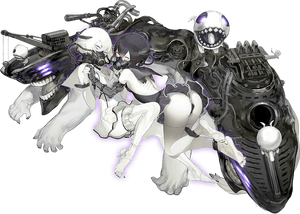 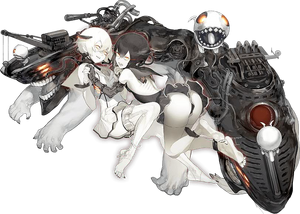 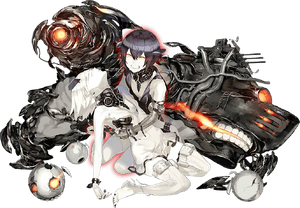 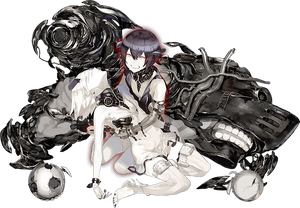 Damaged Form 2
Add a photo to this gallery

Retrieved from "https://villains.fandom.com/wiki/Abyssal_Twin_Princesses?oldid=3716963"
Community content is available under CC-BY-SA unless otherwise noted.