Cause havoc and evil while possessing and killing human children.

Abyzou (Hebrew: "Taker of Children") is a Dybbuk and the main antagonist of the 2012 film The Possession. Abyzou was imprisoned in a Dybbuk Box by the local Hasidic community who always kept a guard over it, sensing that Abyzou was too evil to be allowed free.

Abyzou ended up in the care of an old woman who eventually had enough of the Dybbuk and tried to destroy it. The Dybbuk had been whispering to her constantly and drove her insane, so she picked up a hammer and was about to destroy the demon and its Box but it managed to levitate her and smash her about the room, sensing its incoming destruction. The old woman was almost killed but she survived and ended up in a nursing home by her son who arrived at her house only to be shocked at what happened to her without explanation. The Dybbuk Box ended up in a garage sale.

When Clyde, a man who had recently divorced his wife, took his daughters to the garage sale, his younger daughter Em found the Dybbuk Box and the Dybbuk inside began whispering to her and she eventually bought it. Weird things began happening around the Box such as the wind outside dropping when the Box was opened. Em later tells her father that "an old woman" lives inside the box and told Em that she was "special". The Dybbuk possessed Em through prolonged exposure to her and became ravenously hungry. At school, Em began to get antisocial and violent.

When the family noticed something odd was up with Em after loads of moths were attracted to her and she was eating ravenously out of a fridge, Clyde went to his university with the Box and found out the Box was a Dybbuk Box which had a Jewish demon, a Dybbuk, inside. Clyde then realized his daughter was possessed so he went home to do an exorcism, which resulted in him being attacked by the Dybbuk. Steph, Clyde's wife, said to take Em to a doctor, but she made Brett run off after making some of his front teeth fall out. Em fell into a coma from using the Dybbuk's powers. Clyde and Steph took Em (and the Dybbuk) to the hospital where they eventually found the demon inside Em's body in a CRI scan; very close to her heart.

Clyde went to visit the local Hasidics and took the Box with him, and they got terrified and their head Rabbi, Tzadok's father, told him that this must be left to the will of God. Clyde refuse to accept it while his child is in mortal danger and left. But one of them, Tzadok, stepped out, and said that he would volunteer to help according to permitted violation of the Sabbath law. On the way back, Tzadok looked at the Box and found the Dybbuk's name was Abyzou, the "Taker of Children," and they took Em, and Abyzou, into the hospital to do an exorcism. Abyzou malevolently attacked Clyde in Em's body and ran off down the corridor with Clyde following close behind and eventually they confronted each other in a ward with Abyzou exiting Em and possessing Clyde, but Tzadok caught up with them and did a successful exorcism which resulted in Abyzou climbing out of Clyde's mouth and back into her Box.

When Tzadok was driving back home after freeing Em, Abyzou caused a truck to crash into his car, killing him, yet the Dybbuk box flies out and lands safely and Polish whispering can be heard as the film ends. 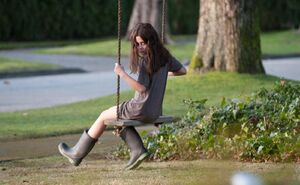 Abyzou, the "Taker of Children", possesses Em as her vessel.

Abyzou in Emily standing up. 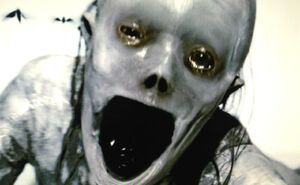 The true form of Abyzou, the Taker of Children.