Absorbing other lifeforms and gaining their knowledge.

Absorb the Doctor and gain control of his TARDIS.

The Abzorbaloff also known as Victor Kennedy was a male Abzorbalobian who appeared in Doctor Who and acted as the sole antagonist of the episode "Love & Monsters".

He was portrayed by Peter Kay.

As is implied by the alien's nickname (his real name is never said in the episode, but the Doctor and Elton Pope coin the nickname for him) he can absorb living beings into himself, gaining their memories and knowledge as a result - his victims retain some awareness for up to two weeks after being absorbed, giving him a truly horrific appearance as the faces of his victims are still visible, however after a few weeks they are fully absorbed into his form.

However, in order to keep his power from going out of control, the Abzorbaloff had to rely on a limitation-field (disguised as a cane) to stop the collected souls from tearing his own form apart.

Little is known about the Abzorbaloff's past or whether his powers are standard for his species, which were aptly named Abzorbalobians. It is known that he comes from the planet Clom, which is the twin planet of Raxacoricofallapatorius which is the home planet of the Slitheen and the Blathereen families, whom the Abzorbaloff looked down upon.

In London in 2007, disguising himself as a wealthy socialite named Victor Kennedy, the Abzorbaloff recruited the services of LINDA (a group of friends who investigated the Doctor) in order to find the Doctor so he could absorb him and gain his memories and knowledge and use The Doctor's ship the TARDIS to return to Clom in victory. Along the way, he absorbed the members of LINDA one by one. To cover up their disappearances, "Victor" would claim that they left the group. Eventually, the two remaining members of LINDA; Elton Pope and Ursula Blake came across "Victor" in his true form and saw the faces of the other members of LINDA all over his body. The Abzorbaloff then absorbed Ursula and tried to do the same to to Elton, but he escaped.

As the Abzorbaloff struggled to contain the rebelling souls, he dropped his cane, which was promptly snapped by Elton, which destroyed his limitation-field and thus the monster melted into nothingness as his powers went completely out of control.

In 2021, an online animated Doctor Who episode called "The Genuine Article" (set in 2009) featured The Abzorbaloff's father attempting to avenge his death by having a creature called The Krakanord to kill The Doctor, only for The Krakanord to turn against him and kill him for making it hide in their hideout in Cardiff for three months and for having to been fed nothing but baked beans and wheat biscuits, which The Krakanord did not like. 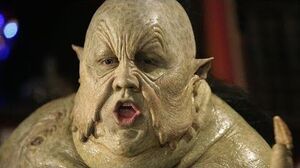 The Abzorbaloff Unmasked - Love and Monsters - Doctor Who 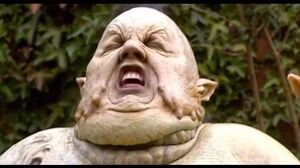 The Doctor Defeats The Abzorbaloff - Love and Monsters - Doctor Who - BBC