Villains Wiki
Register
Don't have an account?
Sign In
Advertisement
in: Articles under construction, Article stubs, Supervillains,
and 49 more

Ace of Clubs is an main antagonist in DC Comics, portrayed as a white man with an ace of clubs symbol on his chest, hence the name.

As a child, Amos Fortune was the leader of a gang of juvenile delinquents. Later, as an adult, he became obsessed with luck, both good and bad, and discovered the existence of "luck glands" that dictate how a person's luck will run. Upon learning how to control these "luck glands" to manipulate his luck, he gathered his old gang and created the original Royal Flush Gang who battled the Justice League on two occasions. Professor Fortune first met the Justice League trying to remove their "good luck" but was defeated. He remained primarily an enemy of the Justice League, and acted as the leader of the Royal Flush Gang, though he abandoned them soon after.

The Ace Android is a robot employed by the Royal Flush Gang. The first robot was design by Derek Reston, an industrialist and engineer who was being mind controlled by Hector Hammond. This robot was advanced enough to pass as human, and stood in contact with Reston. It was destroyed by Black Canary's Canary Cry. Like the first human Aces, the Ace Android acted as the leader of the gang. With later models, leadership passed to the King when a robot was employed.

Later models were considerably larger and less man-like, and served as muscle. They were usually kept out of the fight until the last moment - like an Ace in the hole - when the gang hoped to press their luck or make their getaway.

Ace was one of five children that were taken from their homes and placed in a government-funded facility where they were trained to use their powers for the purpose of being used as weapons. The Joker freed the children and formed them into the Royal Flush Gang team, using four of its team members as interference to prevent the Justice League from defusing all the bombs he had set up in Las Vegas, while using Ace to manipulate the minds of those watching the Justice League in action on television. The Joker claimed that he was immune to Ace's influence because he was already insane, but Batman revealed that the Joker used a neuron-blocking headband which he removed, enabling Ace to manipulate the Joker's mind to the point of incapacitating him.

Ace escaped, but over time her mental powers have increased to the point where she could alter reality. She created a new version of the Royal Flush Gang for them to be her playmates, but instead they chose to battle it out with the Justice League while she holed herself up in a fortress created in a city park, feeling sad and forlorn for the childhood that was taken from her. Amanda Waller of Project Cadmus came onto the scene with the report that with Ace's death, she could create such a psychic backlash that would kill everyone within a distance of miles from her. Batman volunteered to be the one who would use a special device Waller gave him to kill Ace before she died. However, as Batman entered the fortress by Ace's will to let him enter, he chose not to use the device, but instead talked with her and comforted her, letting her know he knows how it felt to lose a childhood. Ace then caused everything she changed with her mind revert back to its original appearance before she died, being carried by a mournful Batman. 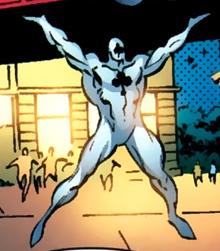 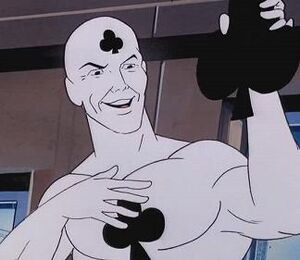 Ace of Clubs in Super Friends
Community content is available under CC-BY-SA unless otherwise noted.
Advertisement