The Most Beloved Terrorist In The World
Jacques Merde
Halloween Decoration

Raise his son AJ.
Get revenge on Walter for being mean to him (all failed).

Achmed the Dead Terrorist is a puppet featured in stand-up comedian Jeff Dunham's ventriloquist act. Achmed is an undead terrorist and a suicide bomber who is not very bright. He has appeared in countless stand-up specials, and appeared as a recurring character in The Jeff Dunham Show as well as the main protagonist of the 2014 animated film Achmed Saves America.

In his own words, Achmed is both a horrible suicide bomber and a horrible parent, having accidentally causing both his own death and (supposedly) the death of his son, Achmed Junior "AJ", when he took him to "Take Your Kid To Work Day".

Despite the obvious villainy in being a terrorist as well as a suicide bomber, Achmed is not a particularly malevolent character as portrayed by Dunham; because of his awkwardness and amateurishness, he is more of a malefactor, despite his claims. He has been known to poke the bear and the crowd at times and has shown some signs of perversion, including being sexually attracted to goats and sheep. Achmed admits that Walter frightens him as well.

Dunham has referenced Achmed as "The Most Beloved Terrorist In The World", and Achmed has since become one of Dunham's most popular characters, and since he was introduced in Dunham's Spark of Insanity special, he has appeared in all Dunham's other specials since then, as well as Dunham's short-lived Jeff Dunham Show on Comedy Central. The video of Dunham introducing him in Spark of Insanity has become the fourth most watched online video ever, having amassed nearly 200 million views. 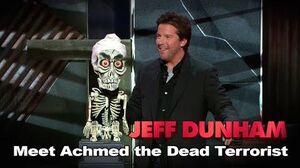 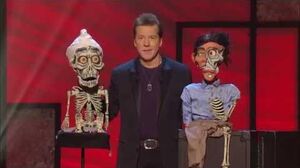