Monster
Acidwire is a Hollow that was once Orihime Inoue's brother, Sora, and an antagonist from Bleach.

He was voiced by Sora Inoue in the Japanese version and Liam O'Brien in the English version.

Sora was 15 when his sister, Orihime, was born and they were raised by a drunkard father and a prostitute mother.

They always argued and beat their children to the point that Sora feared that they might kill Orihime.

Finally, when he turned 18, he took Orihime and ran away, raising her by himself for 9 years. But one day, Sora and Orihime had a fight over some new hairpins he'd gotten for her and when he left for work the next day, the two didn't say anything to each other. Later that day, Sora was badly injured in a car crash and died after being brought to the Kurosaki Clinic.

However his soul remained in the Human World for 3 years, listening to Orihime's prayers for him and the stories she told about her friends. But this made Sora somewhat lonely and resentful of Orihime's friends. Eventually, he was transformed into a Hollow, Acidwire.

After becoming a Hollow, Acidwire attacked Ichigo Kurosaki, but he managed to enter Shinigami form and cut off part of his mask, making him retreat. Acidwire went to Orihime's apartment, succeeding in separating her soul from her body. The Hollow then went after Tatsuki Arisawa, but Orihime ran up to him, knocking his arm back. She begged Tatsuki to get up and Acidwire told Orihime that she couldn't see or hear them.

She asked the Hollow how he knew her name and he asked her if she'd even forgotten his voice. Acidwire tried to attack her, but Ichigo intervened, and the Hollow was surprised by his appearance. Ichigo demanded to know why he could see two Orihimes and Acidwire informed him that her soul had been separated from her body. The Hollow knocked Ichigo out of the apartment and showed Orihime the part of his face exposed due to his Hollow Mask being damaged.

This allowed Oriime to realize who he was and Acidwire told her that because of Tatsuki and Ichigo, she'd forgotten about him. She'd prayed for him less and less until finally stopping altogether, instead always talking about Ichigo. Orihime asked Acidwire why he'd hurt them instead of just telling her, but he snarled that she'd made him into what he was now. But as he threatened to kill her, Ichigo returned, slashing off Acidwire's arm.

The Hollow said that Orihime belonged to him, so she should die for him and went after Ichigo again. However, Orihime intervened, stepping in the way and taking the hit herself, before apologizing to Acidwire. She said she had only wanted him to know about the good things in her life so he wouldn't worry about her and that she loved him.

As Rukia healed Orihime, Acidwire told her that he knew that deep down, but he felt better when she prayed for him. However Ichigo pointed out that Orihime was still wearing the hairpins she'd gotten from him. He told Acidwire that he shouldn't be selfish, since he wasn't the only one that had been sad and lonely.

The Hollow proceeded to take up Ichigo's Zanpakuto, using it to remove his Hollow Mask completely and said he'd become a monster again if he stayed the way he was. After wishing Orihime goodbye, Acidwire stabbed himself with the Zanpakuto, purifying himself.

Since he is a Hollow, Acidwire possesses some spiritual power and feeds on souls to sustain and power himself. He can spit acid and use his long snake-like tail to attack his enemies, as well as separate souls from their bodies. 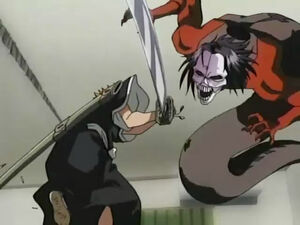 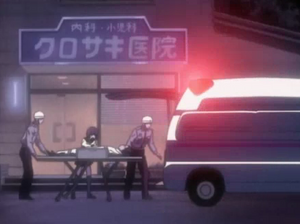 Sora after his car crash. 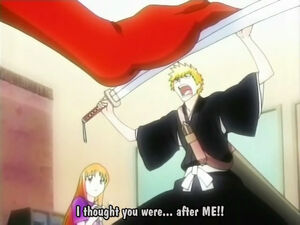 Acidwire being stopped by Ichigo. 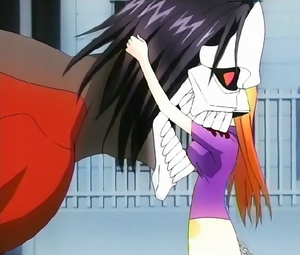 Acidwire being stopped by Orihime. 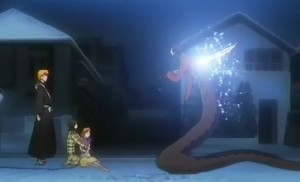