Ruler of the Zangyack Empire

Emperor Ackdos Gill (in Japanese: 皇帝アクドス・ギル, Kōtei Akudosu Giru) is the tyrannical ruler of the Zangyack Empire and the main antagonist of Kaizoku Sentai Gokaiger. Though an emperor, he carries a sword with him and has fireball cannons built into his shoulders.He initially does not appear for the first half, with his son Warz Gill serving as the main antagonist but after his son's death Ackdos arrives to take over the Earth invasion. He is also the uncle of Bacchus Gill.

He was voiced by the late Shinji Ogawa.

Ackdos put his son Warz Gill in charge of the second Earth invasion force after the first invasion force was destroyed by the Super Sentai. He also tasked Damaras with accompanying him and keeping watch over his son's actions.

Ackdos later had two Dogormin deliver the Great Waruzu to the Gigant Horse so Warz could use it to finish the invasion.

Following his son's death, Ackdos came to the Gigant Horse himself to command the invasion. He had Damaras imprisoned for failing to prevent his son's death. His bodyguard, Zatsurig, offered to attack the Gokaigers himself. The Emperor granted Zatsurg permission and sent some of his forces to accompany him. He oversaw the fight and was later seen watching Zatusrig fail's death.

Ackdos then decided to give Damaras a chance to make up for his failure by destroying the Gokaigers. With assistance from Basco ta Jolokia, Damaras was able to capture Captain Marvelous while the other Gokaigers bar Don were seemingly killed. Ackdos resolved to have Marvelous be publicly executed on Earth. However, the execution was halted by the Gokaigers, who killed Damaras soon afterward, helped by Basco's literal backstab.

Ackdos later gathered the Zangyack forces and sent Insarn to weaken the Gokaigers. The Emperor then had his entire attack Earth to destroy all of the planet's inhabitants. However, GokaiRed and GokaiSilver were able to board the Gigant Horse and confront Ackdos. The two Gokaigers then used their final wave attacks to damage the ship's controls and send it crashing into the ground. Not done just yet, Ackdos fought the Gokaigers for a final time. He was finally killed when the Gokaigers used a Rough Wave to finish him off.

Ackdos and Warz were both members of Dai-Zangyack under Emperor Marvelous. Ackdos was shown to be embarrassed by his son's cowardly behavior. During the final battle between the Shocker-Zangyack Alliance and combined Super Sentai and Kamen Rider forces, Ackdos and Warz were both enlarged by the Gigant Horse to combat Go-BusterOh. During the formation of Big Machine, the two were destroyed when the colossal mecha side-swiped them. 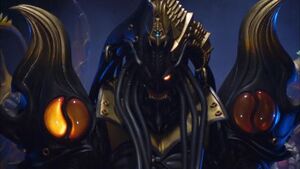 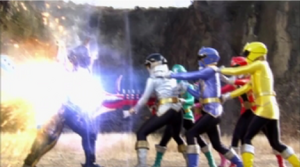