Highest Mountain In The Western Hemisphere

Destroy all planes that fly near him.

Aconcagua is the biggest mountain in the Americas, located on Mendoza, Argentina, and the main antagonist of the Pedro segment of Saludos Amigos.

Aconcagua appears to be a giant grey mountain with steam coming off of his tip and and angry face with a large nose. In cartoonish descriptions, he appears to have actual eyes.

Aconcagua, for the most part, displays no conscious emotion. From what we are able to see from his one expression, he is a very angry and grouchy being. Anything that gets too close to him receives no mercy and is shot down on the spot. In all instances other than his direct confrontation, he is perceived as a destructive force. The narrator describes him to be a "brute" and a "bully".

The mountain first appears in a flashback during Pedro's school scene. Once a plane flew by him, it was struck by lightning, and it crashed to the ground. Because Pedro's mom and dad could not make the mail delivery, he decided to take initiative and do it himself. Things were going fine, until he saw the mountain, getting scared and hiding behind a cloud. He snuck by him, and his journey continued as usual. Pedro eventually arrived at his destination, picked up his mail, and headed back the way he came. On his way, he ran into a vulture whom he chased. The chase led him to accidentally run into Aconcagua. Once he was in his territory, he was exposed to lightning, harsh winds, and almost crashing into sharp spikes. He almost didn't escape, and to make matters worse, he had to go back for the mail that he dropped after being exposed to the storm. Eventually, he escaped Aconcagua's storms, but not before running out of gas, and seemingly falling to the ground. Somehow, however; he was able to make it back home, but in very worn-out shape. 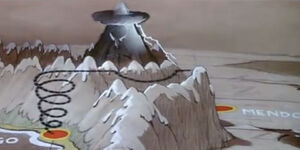 Aconcagua striking a plane during a flashback. 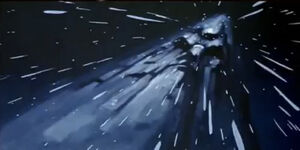 Pedro running into the mountain. 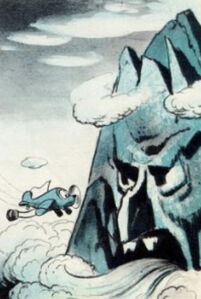 A comic's iteration of Aconcagua.