Protect their colony and devour any and all potential intruders.

Monstrous Arachnids
Acromantulas are giant, venomous spiders belonging to the world of Harry Potter. Extremely dangerous and possessing a voracious appetite, they are described as one of the deadliest monsters to ever inhabit the world.

Endemic to the island of Borneo and southeast Asia, Acromantulas are thought to be a Wizard-bred species designed to guard hoards of treasure and homes. They were first sighted on Borneo in 1794, and one was introduced to Scotland in 1942-43 after Rubeus Hagrid acquired Aragog's egg. Some time later a colony was established there after Hagrid gave the fellow Acromantula Mosag as a mate to him, presumably after having her smuggled to Britain like Aragog before her.

Acromantulas are covered under the 1965 Ban on Experimental breeding, designed to regulate the growth of Wizard-bred creatures, due to their high toxicity, aggression, the inability of Wizards to tame it and its taste for human flesh.

The Chamber of Secrets

The book and film where these monsters make their debut. They capture Harry Potter and Ron Weasley after they are told to "follow the spiders" to find out the identity of the culprit behind the attacks at Hogwarts. The colony brings them to their patriarch, Aragog. He gives them the necessary clues to deduce the nature of the horror living in the school, but they are nearly eaten after Aragog denies them protection from his brood; they are rescued by the timely intervention of the Weasleys' flying Ford Anglia.

The Prisoner of Azkaban

Ron Weasley fought a boggart that assumed the appearance of an Acromantula during a Defense Against the Dark Arts class.

The Goblet of Fire

An Acromantula was put inside the final Triwizard Tournament trial, the maze, where it was defeated by the combined efforts of Harry Potter and Cedric Diggory.

The dead Aragog is buried by Hagrid, Harry, and Professor Horace Slughorn, to prevent him from being consumed by his children, given a bizarre funeral, and his is venom collected by Slughorn to later be sold.

The colony is displaced from the forest by the Death Eaters and advances to Hogwarts Castle, adding to the confused stampede of fighting students, Death Eaters, teachers and magical creatures.

Acromantulas are described as enormous, hairy black spiders, with adults being as large as "carthorses" and their legs reaching a span of up to fifteen feet. Each possesses eight large black eyes and a pair of chelicerae used to eat live prey and even their own dead kin. Additionally, they also have pincers, which are said to mainly be used for communicating as they create clicking sounds when agitated or excited. They are highly aggressive and carnivorous, so they are known to eat humans and show a preference for "fresh meat". They are able to speak in human languages, but the only Acromantula known to have exhibited this trait was Aragog. Acromantulas also practice necrophagy, as they typically consume family members after they die, though this seems restricted to their family instead of their prey.

They also secrete an incredibly dangerous and deadly poison which retains its potency even some time after the Acromantula's death. A rare and sought after ingredient in potions and the like, it is valued at one hundred Galleons a pint.

The females are larger than the male (typical in real spiders) and lay soft white eggs "as large as beachballs", up to one hundred at a time. They hatch after six to eight weeks and are a Class A Non-Tradeable Material.

Originally from Borneo, they exhibit a preference for heavily forested areas and are able to adapt to hot, humid climes as well as cold weather (as they successfully established their presence in both Asia and Britain). Acromantulas build enormous white webs shaped like domes and live communally, which is unusual for spiders, since most carry out solitary lives and only come together to mate.

Their sworn enemy is the Basilisk, whose petrifying stare they fear since they possess eight eyes that they cannot close. Like all spiders, they flee from its presence, and their instinctual terror for it is so great that they forbid mentioning the monster in all conversation. 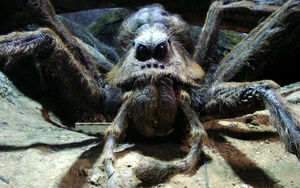