Eat Harry Potter and Ron Weasley for encroaching into their nest (failed).

The Acromantula Colony, also known as Forbidden Forest Acromantula Colony, is an enormous colony of Acromantulas living deep in the Forbidden Forest just outside of Hogwarts School of Witchcraft and Wizardry. Composed of a single family sired by Aragog and his mate Mosag, these hungry spiders who built this colony and made it their home almost ate Harry Potter and Ron Weasley in their trip to the forest, but are forbidden by Aragog to harm Rubeus Hagrid.

The colony was born from two parents, Aragog and Mosag. Aragog came to the Forbidden Forest after he was framed by Tom Marvolo Riddle for attacking students at Hogwarts in 1943, leading to Hagrid's expulsion from the school and Aragog having to flee for his life. A sympathetic Dumbledore convinced the then headmaster, Armando Dippet, to let Hagrid stay at the school as a groundskeeper. This new position allowed Hagrid to help Aragog to settle into the forest and care for him. Along the way, he illegally acquired another Acromantula, Mosag, and the two spiders sired hundreds (and maybe even thousands) of children, possibly even becoming grandparents or great-grandparents as well.

The Chamber of Secrets

When Harry and Ron were investigating the identity of the monster responsible for the recent attacks at Hogwarts, Hagrid was put under suspicion once more and taken into custody by the Ministry of Magic and sent to Azkaban. Hagrid told Harry and Ron to "follow the spiders" when he was arrested; the boys assumed he meant the small spiders living within the castle, but soon found out it referred to the colony after they followed the escaping spiders to the Forbidden Forest.

The Acromantulas seized the boys when they found the Weasleys' Ford Anglia in the forest. The spiders took them to meet Aragog and he told them to kill the humans, but Harry said they were Hagrid's friends and Aragog told them of Hagrid's innocence, stressing that similar events had happened before, and that the "ancient evil" responsible terrifies all spiders.

However, rather than letting them leave peacefully, Aragog decided to let his children eat them, to which the excited progeny took as permission to attack immediately. The use of well-timed spells, luck, and help from the Ford Anglia saved Harry and Ron from being devoured.

Aragog was dying after he becoming seriously ill, and the Acromantulas desperately wanted to cannibalize him, but Hagrid put them off until Aragog dies. Hagrid scrambled into the colony and took out Aragog's body from the woods before they would eat him. Hagrid, Harry, and Professor Horace Slughorn attended the funeral, with the latter praising the colony as "continuing Aragog's legacy" in his eulogy.

During the Battle of Hogwarts, the Death Eaters invaded the Forest at the beginning of the Battle and drove out many creatures, including the Acromantulas, who in turn invaded Hogwarts itself. All of the students and teachers saw them, and the Death Eaters themselves ran from the monstrous spiders. Harry and Ron used stunning charms on them, and Hagrid ran down to stop the humans hurting the spiders; the spiders converged on him, dragging him out into the Forest. The Acromantulas returned to the Forest and presumably set up a new colony elsewhere in the Forest. 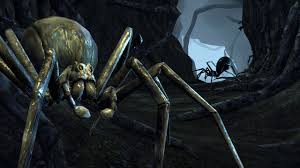 Two of the Acromantulas in their colony

An Acromantula attempting to eat Harry and Ron