Steal a sample of the G-Virus (failed),

Ada Wong also known as The Mysterious Girl is the main anti-heroine/villainess of the Resident Evil video game series. A notorious mercenary and corporate spy with a mysterious background, Ada has been involved in many biohazard events dating back to the 1990's. Characterized by her always calm demeanor and willingness to handle the most serious situations, Ada has been assigned to numerous top-secret missions in her career, including one during the infamous Raccooon City Incident of 1998. While often working in the employ of villains such as Albert Wesker, Ada holds no allegiance to her employers and often betrays them for her own agenda. This makes her at times an anti-hero who sometimes aids Leon S. Kennedy, though other times the two find themselves at odds.

Past and early life

Very little is known about Ada's early life; even her real name is not known. All that is known is that Ada was born sometime around 1974, and is of Chinese-American descent. Ada received training as a spy as part of a Chinese black market criminal syndicate. As an independent contractor for the syndicate, Ada worked for many different organizations, often betraying them for her own mysterious purposes. She at one point worked for Derek Clifford Simmons, a high-ranking US government official and leader of the organization known only as The Family. Simmons appreciated Wong's capabilities as a spy, but developed an insane romantic attachment and obsession with her, believing their shared genius intellect made them a perfect couple.

In the 1990's, the syndicate ordered Ada to infiltrate the rising underworld of Bio Organic Weapons (B.O.W.). By 1998, Wong was working for an unnamed bioweapons developer known only as the The 3rd Organization. The organization sent Wong to carry out espionage against its rival company, the Umbrella Corporation. Wong became romantically involved with Umbrella researcher John Clemens, who worked at Umbrella's Arklay Mountains facility located underneath the Spencer Mansion. Unaware of Ada's true intentions, Clemens shared information about Umbrella's bioweapons research with her, but was ultimately killed when the T-Virus leaked at the facility.

In September of 1998, the organization gave Ada a new mission: to recover a sample of the Golgotha (G) Virus from Umbrella's underground research facility known as NEST. This mission was coordinated by Albert Wesker, a former Umbrella researcher who had defected from the company following a near-death experience. Assuming cover as an FBI agent investigating the T-Virus outbreak in Raccoon City, Ada was to make contact with reporter Ben Bertolucci, who was flagged as having information on the G-Virus and was currently being held in the Raccoon Police Department's jail after arousing the ire of corrupt police chief Brian Irons. Entering the city on September 29, Ada found it had already fallen to the T-Virus and was now swarming with zombies and unleashed Umbrella B.O.W.s. Ada encountered rookie police officer Leon S. Kennedy during her search for Ben, saving him from a Zombie Dog.

Ada encouraged Leon to get out of the city and stop looking into her investigation. Leon eventually met Ben, who was shortly thereafter killed by the Tyrant known as T-00. Ada told Leon Ben was her informant, and said she would talk with Leon further once he had secured an escape from the R.P.D. Leon managed to recover a parking garage keycard from Ben's corpse as well as an audio recording of an interview with Umbrella researcher Annette Birkin. Leon presented the recording to Ada, who concluded it contained no useful information. The two then exited the R.P.D.'s parking garage and searched for the entrance to NEST, which Ada stated was under the sewers beneath the city. The two wandered through the sewers until they encountered Annette, who opened fire on them, wounding Leon. Ada tended to Leon's wounds and left him behind with her coat, then pursued Annette. During her pursuit, Ada was knocked into a pile of garbage and impaled through the leg by a shard of metal. Awakening, Leon fought through the sewers to rescue Ada, and the two made their way onto a tram which led straight to NEST. During the journey, Ada and Leon discussed how much they trusted one another before Ada finally kissed Leon. She instructed Leon to recover the G-Virus sample from the facility, as she was too injured to do it herself.

Leon battled his way through NEST and managed to extract the G-Virus sample, triggering a lockdown and self-destruct sequence. As he ran back to Ada, Leon encountered Annette, who was forced to put down the monster who had been pursuing Leon since the station. She explained that the monster was once her husband William, having injected himself with the G-Virus. She insisted that the virus needed to be destroyed before it fell into the wrong hands, but Leon insisted it was going to the FBI as evidence. Annette retorted that Ada was a mercenary after the G-Virus for herself, not an FBI agent. Leon refused to believe Annette, and after defeating G encountered Ada, who asked him to hand over the sample. Leon confronted Ada about her duplicity, prompting her to draw a gun on him.

The two each aimed their guns at each other, unable to actually pull the trigger. Annette, badly wounded by G, shot Ada in the shoulder, after which the catwalk she and Leon were standing on collapsed. Ada fell off as did the G sample, but Leon grabbed her arm, trying desperately to save her. Ada told Leon to forget about her and escape, then let go of his hand and fell down the shaft. However, Wong managed to survive the fall, and threw an anti-tank launcher to Leon during his final battle with T-00. Though she failed to recover the G sample she was after, Ada did recover a tissue sample from G itself and escaped Raccoon City with it.

By 2004, the organization became aware of a cult in Spain known as Los Iluminados, which used a parasite known as Las Plagas to control human hosts and render them servants of the cult's leader, Lord Osmund Saddler. Wesker sent turncoat former U.S. agent Jack Krauser to recover a sample of the Dominant Species Plaga used by Saddler to control the Plagas' human hosts, but when he did not return in time, the organization pressured Wesker to send Wong as well. Ada arrived in the village in Spain where the Las Plagas had taken over, and witnessed Leon, now an agent of the U.S. government trying to rescue the president's daughter Ashley Graham from Los Illuminados, fighting his way through the village. She continued her search for the Dominant Species Plaga sample, which led her to the castle of Saddler's subordinate Ramon Salazar. There, she revealed herself to Leon and the two had a brief fight before Wong escaped.

Ada was ordered by Wesker to assassinate Kennedy, but she could not bring herself to do it. Ada instead helped Leon get to the island where Ashley was being held, before departing to take care of her own business. When Krauser attacked Leon, Ada shot Krauser and forced him to leave the area. She witnessed a subsequent fight between Leon and Krauser, having injected himself with the Plaga sample he was supposed to recover, which ended in Krauser's death. She reported this to Wesker, who reiterated her mission to recover a Plaga sample, with Leon's death being a secondary objective. She encountered Leon once again, who under the influence of the Plaga he had been implanted with attempted to strangle Ada to death. Ada stabbed Leon in the leg and freed herself, declaring that they needed to get the parasite out of his body. The two split up, and Ada eventually found herself in a chamber where Ashley was being held.

When Saddler tried to stop Leon from rescuing Ashley, Wong opened fire on Saddler, immobilizing him long enough for Leon and Ashley to escape. Ada shot a group of explosive barrels to prevent Saddler from pursuing them. Instead, Saddler captured Ada. When Leon finally confronted Saddler on a rooftop, he freed Ada. Saddler mutated into a monstrous form and attacked Leon, but Ada tossed him a rocket launcher which he used to destroy Saddler. Ada then held a gun to Leon's head and forced him to hand over the Dominant Plaga sample he had recovered. Ada then departed in a chopper, but not before activating a self-destruct system for the island and warning Leon to escape.

Ada was hired to steal a Dominat Plaga again. This time covertly by Simmons. This lead her to imitate a BSAA operative to sneak into the secret lab of the country's leader Svetlana. While successful in retrieving the sample, Ada decided not to fulfill the deal; even when offered to have her arrest warrants deleted.

In 2013 Ada was contacted by Simmons, who informed her of information concerning her future.

She appears as a supporting protagonist in the 2012 film Resident Evil: Retribution and was portrayed by Bingbing Li.

Ada Wong appears as a major character and a playable hero (being of the Purple element) in the crossover card game TEPPEN, appearing under the guise of the cloaked Mysterious Girl. Throughout the various storylines before her introduction, Ada appears under her guise to guide those to the Land of Illusion.

In her own story mode, Ada is first seen under the task of finding the technology of a long-lost civilization, before encountering Albert Wesker. After defeating him, Ada uses a grappling hook to escape the fight and further into the ruins, to which she would eventually find a capsule containing Zero, who then proceeded to burst out and attack her. However, Zero would eventually and mysteriously deactivate with a device, to which Ada picked up before heading into the forest. Inside the forest, she would find a Felyne, to which she would defeat and steal its treasure. Now with everything she needed, Ada proceeded to dawn her disguise, ready to lure those she needs into the Land of Illusion for her schemes, showing that her story mode is a prequel to the others.

She appears in the 2021 film Resident Evil: Welcome to Raccoon City and is portrayed by Lily Gao. 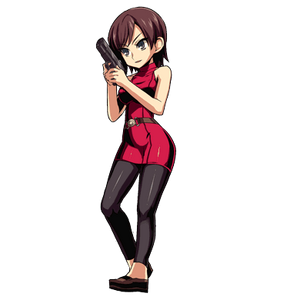 Ada Wong in Minna to BIOHAZARD Clan Master (RE2). 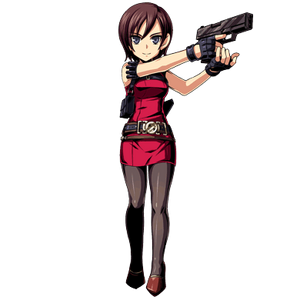 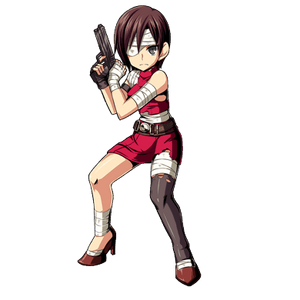 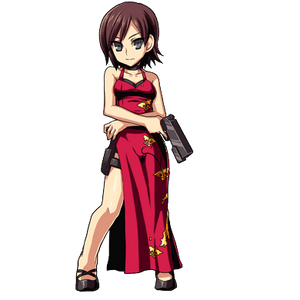 Ada Wong in Minna to BIOHAZARD Clan Master (RE4). 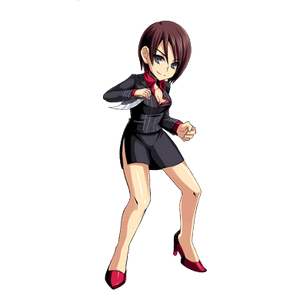 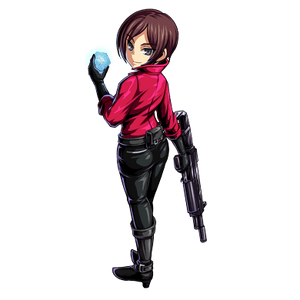 Ada Wong in Minna to BIOHAZARD Clan Master (RE6).