Lead singer of the Dazzlings

Harness negative Equestrian Energy from "competitive" students including the Mane 5.

Take over the world (both failed).

Adagio Dazzle is one of the main antagonists of My Little Pony Equestria Girls: Rainbow Rocks and a minor antagonist in the special Equestria Girls: Sunset's Backstage Pass, making her debut in the pilot. She is a siren and the lead singer of the band the Dazzlings, rivaling the Rainbooms.

She is voiced by Kazumi Evans.

Like those of her bandmates Sonata Dusk and Aria Blaze, Adagio Dazzle's wings are translucent and non-feathered. Human Adagio Dazzle resembles Unnamed Girl #11.

The word "Adagio" in music terms, is a tempo marking indicating that music is to be played slowly.

In the film, Adagio and the other Dazzlings are introduced in the human world. They are sirens from Equestria who were banished to the human world by Star Swirl the Bearded. They are first seen in a café causing tension between the patrons when they witness the Equestrian magic that brought Sunset Shimmer to her downfall in the first film. Sunset gives a tour of the school to Adagio and the other Dazzlings but tells the main five that something seemed "off" about them. What is "off" about them is confirmed when they convince all of the students except the main 5 and Sunset with their music to turn the friendly Mane Event into an all-out Battle of the Bands.

During the night of the finale, the Dazzlings perform their most powerful spell while singing a song in front of the entire school, gathering enough energy to transform into human-siren hybrids. Suddenly, the Rainbooms appear and retaliate with a song of their own. Annoyed that they escaped and are once again resistant to her spell, Adagio, and the Dazzlings summon astral projections of their true forms to finish them off, successfully defeating the Rainbooms. With no options left, Sunset Shimmer picks up the microphone and sings an empowering song of her own, which re-motivates the Rainbooms' and allows her to transform into a human-pony hybrid for the first time. Together, Sunset Shimmer and the Rainbooms summon a massive astral projection of an Alicorn that vaporizes the Dazzlings' power and causes their magic-channeling pendants to shatter, rendering them incapable of casting spells or singing. With no power left, Adagio and the Dazzlings flee in shame as the audience, now free of their spell, boo them off stage and pelt them with food.

A long while after the second film, Adagio resurfaces at the Starswirl Music Festival, having been turned fully human. Even though her songs indicates otherwise, she is still not reformed and has nothing but contempt for humans, loathing the fact that she is now a human herself, and is now more of a bully than evil.

Adagio Dazzle is shown to be scheming, manipulative, and only concerned with gaining power and being adored by others (not unlike Sunset Shimmer in the first movie, except while Sunset Shimmer had some morals, Adagio had none). She is able to sway student opinion with ease and trick Trixie into removing The Rainbooms from the competition. Adagio also bears considerable contempt toward her fellow sirens Aria and Sonata, calling them "idiots" and generally disliking their company. She was also both arrogant and sadistic; when Sunset Shimmer confronted her Adagio deliberately emphasized the similarities between her and Sunset Shimmer's past self, while also implying that her friends don't really care for her and see her as a liability. Her character is defined in one line: "it doesn't matter who you hurt if you're just proving you're the best", a line that also seems to suggest she is a narcissist.

She is arrogant and vain, not viewing her fellow sirens as equals, getting annoyed when Aria suggested she lead for once. This is justified somewhat since she is incontestably the best planner among the Dazzlings. However, she is so self-assured that she never considered getting defeated, thus this arrogance led to her downfall.

In Equestria, the sirens' appearance is a Hippocampus. In the human world, the Dazzlings are shown to possess translucent fin-like wings in their anthro forms, unlike their true forms. Their siren forms are summoned as astral projections from their pendants and used to weaken the Rainbooms.

Aside from flashbacks, Adagio's true form is never physically shown in the film, but she and her fellow band members gain pony-like ears. She has orange and yellow streaked hair, a high curly ponytail, yellow skin, hot pink eyes and translucent wings. They also summon astral projections of their true siren forms from their pendants. 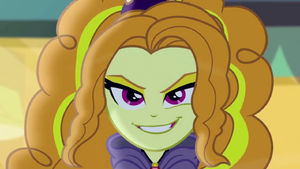 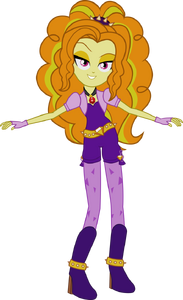 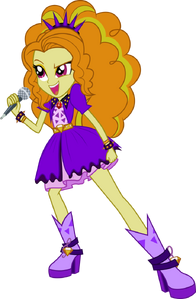 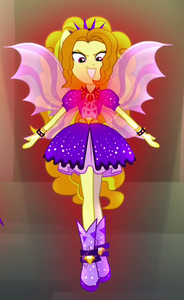 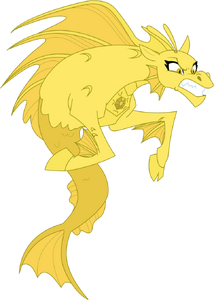 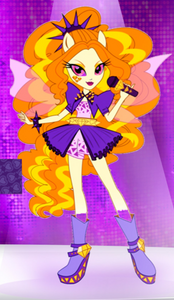 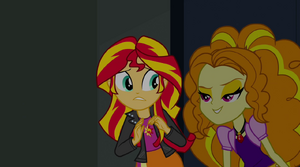 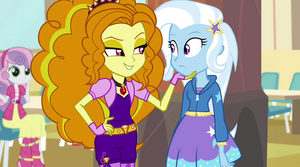 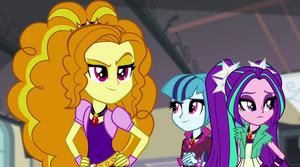 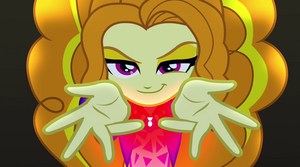 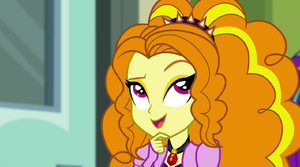 Alongside Aria Blaze and Sonata Dusk, Adagio received a positive reception from critics and the brony community. She was known to be one of the most fan-favorite villains in My Little Pony: Friendship Is Magic, alongside Discord, Queen Chrysalis, and Lord Tirek.