The Prince
His Eminence

Take down Father Franchesco for calling him out for his greed and selfishness.

Father Adalrico Candelaria is an elusive target in HITMAN (2016) and later returned in HITMAN 2 (2018), serving as the main antagonist of The Prince Elusive Target Mission.

He is a German-Chilean Catholic Cardinal considered by Vatican insiders to be a strong contender for the next pope, despite accusations of ties to the Pinochet regime in Chile in the '70s and '80s.

Adalrico Candelaria is an ethnically German native of Chile. According to the files from ICA, he once related himself to Augusto Pinochet's regime of the 1980s and was responsible for the disappearances of opposition members during that period. No concrete evidence of this exists in the public domain, and the Cardinal has successfully distanced himself from that troubled period in Chile's history.

Ecumenically, the Cardinal is a staunch conservative, and is considered by Vatican inciders to be a strong contender for the next pope.

Underneath his polite and sophisicated exterior, Father Adalrico Candelaria is a greedy, corrupt and selfish man who shows distaste over the church in Sapienza and Father Franchesco's righteous belief to devote towards genuiue kindness. He plans on ruining Father Francisco for rightfully calling him out for being selfish and greedy. In addition to that, he is well connected among influential cardinals of the Catholic Church. 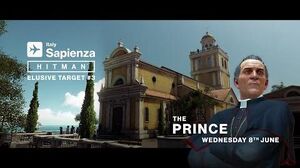