Villains Wiki
Register
Don't have an account?
Sign In
Advertisement
in: Mature, Pure Evil, Destroyer of Innocence,
and 52 more

Give vampires an equal place in the world.

Adam is the main antagonist of the 2012 film Abraham Lincoln: Vampire Hunter. He is a slave owner who happens to be the leader of a vampire clan and the arch-nemesis of Abraham Lincoln and Henry Sturges.

Little is known about Adam's past, except that he claims to have been on earth for approximately 5,000 years. He was described by Henry Sturges as "He from which others are made", indicating that he was the first vampire. Adam recounted how he watched the cities of Egypt get built through pitiless slave labor, watched Pagans feed Christians to lions, and watched Africans sell their own kind to Caucasians. Seeing humans treated with such cruelty had lead Adam to despise the human race, viewing people as heartless, selfish, and inferior. Adam also deemed that all humans were a slave to something, no matter how they viewed their lives.

The most vivid viewing of an event in Adam's past is how he turned Henry Sturges into a Vampire at an unspecified date. Henry, as a skilled vampire hunter, single-handedly destroyed a few of Adam's vampire henchmen, but Adam easily overpowered Henry and bit his neck, adding him to the family of the undead. It was then Adam pointed out to a devastated Henry that vampires cannot destroy their own kind, as no matter how hard Henry tried it seemed as though an invisible forcefield was preventing him from stabbing Adam with his silver knife. Since then, Henry began to recruit humans to pass his skills onto, in the hopes that evil vampires, like Adam, will someday be destroyed.

Henry eventually found a promising apprentice in Abraham Lincoln, who became the 16th President of the United States of America. At some point before the time of the American Civil War, Adam and his vampire clan took to enslaving African people and subjecting them to unfair slave labor like several other Americans. Unlike the humans, however, who supported slavery purely out of greed, laziness, and racial discrimination, the vampires used their slaves as sustenance, knowing they would have an unlimited supply and would not arouse suspicion as very few people cared if slaves died.

After learning that a human named Lincoln was hunting and destroying vampires in Springfield, Illinois, Adam attempted to have Lincoln captured but his plan failed. After having witnessed the horror that African-American's were legally exposed to, Lincoln pursued politics and law, in the hopes to abolish slavery in America someday.

Whilst in office during his early fifties, Lincoln learned that the vampires of the south had joined forces with the Confederacy and were easily quashing the Union. To make matters worse, Adam sent his sister Vadoma to infiltrate the White House and murder Willie, Lincoln's youngest child. Having given up vampire hunting initially, Lincoln remembered that all vampires were powerless against silver, so he had all of the Unions silver collected, melted down, reset, and reformed into bullets and cannonballs. One of Lincoln's longtime friends, named Speed, warned the vampires of the plan to transport the silver via train, in the hopes that his apparent treachery will lure the vampires into the one place so they could finally be destroyed.

Adam lead a large pack of vampires to stop the train while it was in motion. Lincoln and his best friend, William Johnson, managed to destroy all the vampires that attempted to stop them but even combined they were no match for the mighty Adam. Adam almost succeeded in turning Lincoln into a vampire but was stopped by Henry, who managed to save Lincoln and Johnson but was, again, easily defeated by Adam. Adam suddenly found out the train was full of rocks, not silver, and that Speed had lied to him. Adam savagely killed Speed and knocked Henry unconscious. Adam got off the train and began to kick out the support beams holding the tracks up over a crater but Lincoln and Jonhson were able to get off it before it fell. Adam cornered them on the tracks, demanding Lincoln tell him where the silver was. Lincoln responded by striking Adam in the heart with his silver pocket watch, finally destroying the ancient monster and Henry saved him and Johnson from falling to their doom.

It turned out that the train had been a ruse and that the silver had been delivered on foot to the Union armies campsite; even Lincoln's wife Mary Todd also took the opportunity to kill Vadoma in revenge for Willie's death. Now armed with silver ammunition, the Union army easily overwhelmed the helpless vampires and eventually won the Civil war. Slavery was henceforth abolished, all remaining vampires fled the country and Adam's destruction had been in vain. 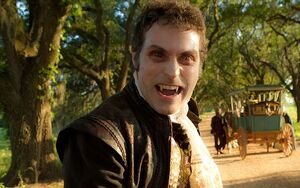