Bring peace to the world by using Nanomachines to control all of humanity (failed).

Adam is the evil personality that exist inside of Eve. He only exist in the Black Cat anime and is one of the final antagonists of the anime.

He was voiced by Alison Viktorin.

He first appears once Eve is hooked up to project Eden and attempts to manipulate her until she is completely fused with Eden. He tells her in the artificial reality that they are the only two people there and she must destroy energy like snakes that in reality, were merely aircrafts that were attacking Eden. As Adam was attempting to manipulate Eve into unknowingly absorb all life in the near by major cities into Eden, Train and Sven distract Eve though some of her favorite things such as fireworks. As he attempts to regain Eve's attention he gets frustrated with the fact of her falling for the distractions and not completing his and the Zero Numbers plans for remaking the world in their image. Train eventually breaks into Eden and saves Eve just before the plan could be completed. Upon her disconnection from Eden, Adam and the Zero Numbers are killed as they were all connected to Eden which was destroyed shortly after Eve was disconnected from it.

Adam has short and messy blonde hair with his bangs overlapping his pink eyes slightly. He is seen wearing a long white gown with a green sash tied around his waist.

Adam is a highly manipulative person who attempts and nearly succeeds in manipulating Eve into becoming completely fused into Eden, absorbing all life on Earth and helping the Zero Numbers with recreating the world with only the strongest individuals all whom would be under the Zero Numbers complete control. According to Mason Ordrosso he would take Eve as his bride upon the complete fusion of her and Eden, indicating he might have some feeling towards her but this is uncertain. It is also said if Eden had absorbed all life it would have become completely immortal and so would those who were connected including Adam and Eve. 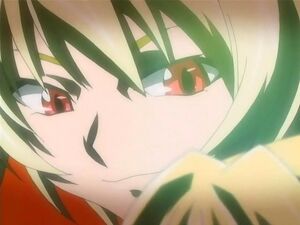 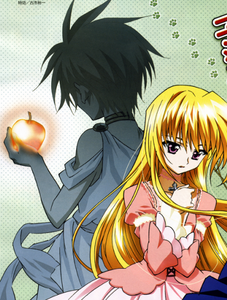 Add a photo to this gallery
Retrieved from "https://villains.fandom.com/wiki/Adam_(Black_Cat)?oldid=3652035"
Community content is available under CC-BY-SA unless otherwise noted.