Member of the Kamen Riders (currently)

Help all the Kamen Riders defeat Xaviax for all of his nasty work (succeeded).

Vengeful Fallen Hero
Adam is the original Kamen Rider Dragon Knight, and Kit's Ventara counterpart, who inadvertently betrayed the other Kamen Riders venting them while in suspended animation (save for Kase and Len) allowing General Xaviax to take over Ventara. Adam wanted to retire from being a Kamen Rider after Eubulon disappeared, which Xaviax promised to do before venting the other Riders. Not wanting to fight anymore after "betraying" his fellow Riders, he secludes himself with a girl named Sarah, who he fell in love with, in an illusion created by Xaviax until he is called upon again after all the Riders but Len are vented. He serves as a strong contrast to his Earth counterpart, Kit Taylor. He is the anti hero of the TV show Kamen Rider Dragon Knight.

In spite of the fact that Adam and Kit aren't so different with each other (Kase once comments the way Kit acted), the difference between him and his Earth counterpart is his weak heart, naive personality, and is less responsible, allowing Xaviax to easily manipulate into making bad decisions when he was given clear choices. This was shown when he met Xaviax for the first time, Adam immediately followed his deceptive suggestions to free his fellow Ventaran Riders from their duty both against their consent and without considering whether it was the right thing to do or not. This is different with Kit when he faces a similar situation: when Xaviax asked him to vent Len in exchange for healing his father. Kit, who at that time had a strained relationship with Len due to Kase's return, remembers a similar situation from when he was in High School and refused the offer, while Adam, feeling to guilty to set things right secluded himself and Sarah in illusion out of shame.

In spite of his actions and Len and Kit believing that he turned against them out of pure spite, it must be noted that Adam isn't truly a malicious person: He was torn between his duty as Kamen Rider and a normal life with Sara and had trouble balancing it, unlike Kit who had stronger and better resolve. The trauma of his past betrayal, combined with his weak heart made it difficult for him.

Like the Earth Riders, he was tricked by Xaviax but since then, his betrayal weighed heavily on him. In order to keep his secret safe, he is assigned to befriend Len and Maya, who is the temporary Siren, and keep them from destroying more of his teleportation beacons. He destroys a monster attacking Len hoping to get back his trust saying that Xaviax had tricked him. But Len isn't easily swayed as both trigger their Survive Modes. Adam attempts to use his Final Vent in retaliation but runs away.

Following the return of three of his fellow Ventaran Riders, he tries to gain back the trust of Hunt, Kamen Rider Axe, who threatens to vent him following a battle against Xaviax's monsters. Xaviax, fed up with his failure to infiltrate the Riders, sends monsters to attack Maya Adam attempts to save. He later meets up with his mirror twin Kit Taylor who berates him for betraying the other Riders. Adam argues that Xaviax tempted him with something more important than Kit's offer.

This explodes between a battle between the two mirror twins as Kit, as Onyx, fights Adam and overpowers him until Eubulon shows up. Eubulon stops Kit from turning his nightmares into a reality and allows Adam to explain why he betrayed the other Riders but the others aren't interested in what the he has to say. Eventually, Adam does prove his worth and helps the other Kamen Riders stop Xaviax. After the final battle with Xaviax, Adam decides to retire from being a Kamen Rider, and Eubulon gives his Advent Deck to Kit. 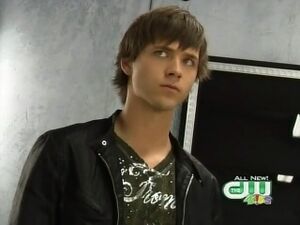 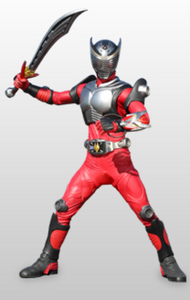