Adam Clarke is an antagonist from the Cold Case episode "Volunteers". He was a leader in the anti-war movement in 1969. Unbeknownst to anyone at the time, he was also an informant for the FBI, and killed two of his friends, Julia Hoffman and Gerard Gary, when they found out. He was arrested for murder when the bodies were discovered some 35 years later.

He is portrayed by Riley Schmidt as a young man and by Chris Sarandon (who also played Jerry Dandridge in Fright Night, Prince Humperdinck in The Princess Bride, Reverend Jimmy Current in Crypt Presents: Bordello of Blood and Dracula in Tales of the Teenage Mutant Ninja Turtles) as an older man.

Adam was in a six-month relationship with Julia at the commune they lived at, but their relationship was an open one, and Julia was involved with Gerard as well. Adam wasn't bothered by this, however. He saw it as a product of revolutionary times and was more interested in his role in the movement, and reveled in the adulation he received for it.

Adam burned his draft card at a rally at the commune in front of a large crowd including Julia, Gerard, and Terri Maxwell. It was all an act, however. Adam had already served in Vietnam from 1966 to 1967. Sometime later, Adam was caught driving across state lines in a peace van filled with marijuana and arrested for drug sales. Adam was facing time in state prison until the FBI approached him with a deal; Adam would report suspicious movement for them and take pictures and the charges would be dropped. Unwilling to give up the life he loved, Adam agreed.

Adam followed Julia and Gerard around and secretly photographed them. He came to learn they were working for JANE, an underground organization that provided abortions for women, which was illegal at the time.

Early in the morning on June 3, 1969, Adam photographed Julia and Gerard bring a teenage girl named Renee to Dr. Leo Linden's home to undergo an abortion. He also witnessed Renee's boyfriend Charlie Rinzler follow them and confront them about what they were doing, before Gerard walked him outside and calmed him down.

After Dr. Linden finished with Renee's procedure and Julia and Gerard took her home, Adam continued following them, taking pictures. Julia finally noticed Adam and Gerard realized he was an informant. Adam quickly pulled out a gun and forced them over to Julia's car where he shot and killed them both.

Adam quickly devised a plan to cover up the crime. Adam followed Charlie to the the future site of the Calvin Building, where Charlie was helping to lay the foundation. One night, after dumping Julia's car in the river near the Bogota coffee plant, Adam wrapped Julia and Gerard's bodies in plastic and buried them at the building site.

In 2004, Adam was working as a "life coach" to inspire people. He'd written a book telling people that "winners take responsibility" and an "audacious action with the element of surprise will give you the upper hand." He was giving a seminar when he was approached by Detectives Lilly Rush and Scotty Valens, who told him Julia and Gerard's remains had been found. They asked him about his relationship with Julia and he calmly explained that it wasn't an issue.

Lilly returned some time later, having discovered that Adam had been an informant. Adam was aware of this, having been given a warning from an old FBI contact that someone was looking into his past. To deflect suspicion to Charlie, Adam admitted to being an informant without being asked, and provided pictures he'd taken of of Charlie at the construction site.

Adam's plan seem successful, and Lilly and Scotty did interrogate Charlie. However, Adam hadn't counted on one thing. A strand of his hair had fallen into the plastic with Julia and Gerard's bodies. The police were able to match the DNA to a herbal cigarette of Adam's that Lilly had secretly taken the second time they spoke.

Lilly and Scotty returned for a third and final time, telling him they'd figured out his plan and about the hair in the plastic. A defeated Adam tried to explain that he'd loved the life he lived and couldn't stand to give it up. Lilly and Scotty responded by asking him if he thought Julia and Gerard loved their lives. He was then charged for their murder.

Ironically, some of the pictures Adam took of Julia and Gerard would later be presented to some of their acquaintances, Renee, Terri, and Colette Ferguson, in their memory. 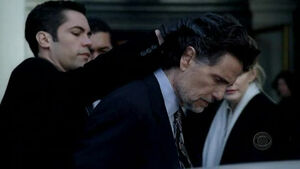