Former companion of the Doctor

Get revenge on the Doctor for banishing him from the TARDIS.

Vengeful Fallen Hero
Adam Mitchell is a character in Doctor Who, who appeared in the revival's first series for two episodes as a short-term companion to the Ninth Doctor, and was banished from the TARDIS. The character is portrayed by Bruno Langley, who is best known for portraying Todd Grimshaw in the soap opera Coronation Street.

Adam Mitchell wasn't seen in the series again, but did return in the 2013 comic book series Prisoners of Time as one of the primary antagonists in which he plans revenge against all the Doctor's incarnations for his banishment and mostly for erasing the knowledge from the future that could have saved his mother from her death.

Adam first appears as a young researcher working for Henry Van Statten, who is the owner of a museum of extraterrestrial artefacts. He forms an attraction for the Ninth Doctor's companion Rose Tyler and reveals his love to see the stars. He ends up fleeing with Rose when a live Dalek kept within the base ends up on the loose. After the creature's death and the museum closes down, Rose convinces the reluctant Doctor to allow Adam to come along with him, which he eventually accepts.

However, Adam's travels with the Doctor don't last long. When the TARDIS lands in the year 200,000 on Satellite 5, he becomes tempted with the wealth of futuristic information. He has an advanced computer interface port installed inside his head, used to transmat information directly to and from the brain, which opens his head at the snap of someone's finger. He attempts to send back information from Satellite 5's archives to his answering machine in the 21st Century using Rose's modified mobile phone, but this act allows the villains on the station to extract information on the Doctor from Adam's brain. As punishment, The Doctor banishes Adam from the TARDIS and sends him back at his home in the 21st Century, destroying his answering machine to prevent the information of the future from leaking into the past. He advises Adam to live a quiet life and stay out of trouble in order to prevent the chip in his head from being discovered, and departs in the TARDIS with Rose. When Adam's mum returns home, she reacts in shock after she ends up snapping her fingers and his head opens up.

After the death of his mother, Adam gets hold of the Vortex Manipulator and plans to kidnap the Doctor's companions as revenge for him not being able to acquire the knowledge that could have saved her. He tracks down all the Doctor's previous incarnations and kidnaps their companions. It is also revealed he has teamed up with a past incarnation of the Master - the archenemy of the Doctor. Adam comes up with the idea to give each of the Doctor's incarnations a choice of one companion to save, whilst the rest die. However Adam is given a unique chance of redemption and he sacrifices himself to destroy all the Master's equipment. Adam is later buried and recognized as a true companion. 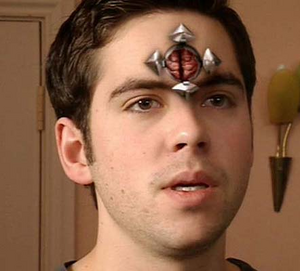