The Young and the Restless

Outcast of the Newman family

To gain acceptance into the Newman family, regardless of how its other members feel about him (formerly)

To reconnect with Chelsea and Connor (succeeded)

Adam Newman is a fictional character from the American CBS soap opera The Young and the Restless. Introduced as a baby in 1995, he was later removed from the show for plot purposes, then rapidly aged upon his reintroduction in 2008. First played as an adult by Chris Engen, he was replaced after just a year in the role in 2009 by most recent portrayer Michael Muhney, who played the role until Muhney was fired from the show in December 2013, with his last on-screen appearance on January 30, 2014. The role was then portrayed by Justin Hartley from November 2014 to September 1, 2016, when Adam was presumably killed following Hartley's casting as a series regular in the NBC drama This Is Us. In 2019, it was announced Mark Grossman had replaced Hartley in the role.

Adam is kind, caring, selfless, intelligent, calculating, confident, (his confidence is not to the point of being overconfident) however, there is a limit of how kind and caring he can be; especially towards individuals he dislikes or despises for good reason, Adam can sometimes be short tempered and impulsive, but he always tries his best to control his temper, and he never intentionally makes a scene in public, Adam does not like to hurt good/innocent individuals, and he always tries his best to avoid it, however, he does have his moments when he does get pushed too far. His devotion and loyalty to the people he loves, mainly Chelsea and Connor, are never questioned, however, he is not loyal to the Newman family, mainly Victor, because of what kind of people they are and because they have treated him like garbage, for no clear reason, he also despises all members of the Newman family (except Noah, Reed and Faith) for good reason, mostly due to their unwillingness to accept him as part of the family.

Adam acknowledges his mistakes and learns from them as well, but he rarely admits he made mistakes out loud towards towards individuals he dislikes or despises for good reason, he never underestimates his opponents, he also has a conscience, guilt, morals, and remorse for his actions, and always tries to do the right thing, he always does something out of the kindness of his heart. Adam has compassion and sympathy towards good/innocent individuals. He is a very forgiving person (far more than his father) however, he also knows there are some things that just can't be forgiven.

After Adam (apparently dying in a car explosion) returned as Gabriel Bingham, he was reluctant to impersonate Gabriel, as he had saved his life (who had actually dying in the explosion) but he had no choice, mainly because Sage Warner blackmailed him into being Gabriel, otherwise she would tell the police that he is alive, as he was previously wanted for running over Delia Abbott and leaving her to die (however, in truth, he did not realize he had hit Delia, until a few days after the accident) he did not confess as he could not prove he was innocent. He managed to blackmail Victor into making him CEO of Newman-Abbott, partly as revenge for blackmailing him into letting Victor see his grandson and mainly because Victor used the death of an innocent child to try to control him.

Adam reconnected with Chelsea and got her to fall in love with him again (unaware that Gabriel was actually Adam) and got the be in his son's life again. He (secretly) became unhappy, as he realized that everything he had accomplished was based on a lie, as he achieved it as Gabriel, not as Adam.

However, when Adam made the mistake by mocking a photograph of his father, Victor, when he said that he is Adam, Chelsea, overheard what he said, and demanded to know what he meant by that, realizing that he had no choice, he confessed the truth to Chelsea and was willing to confess to everyone else, as well and face the consequences of his actions. Chelsea stopped him, partly because it would just hurt them all over again and mainly because it would hurt Connor; as he would lose his father all over again.

Adam is later revealed to be the mastermind behind the Paragon Project intended to bring Victor down and had been (secretly) collaborating with Ian Ward, a cult leader from Nikki Newman's past who despises Victor just as much as Adam does (this project was also why Victor had Jack held captive and brought Marco out of prison) however, similar to the situation between Victor and Marco, as the latter refuses to continue being under Victor's thumb, Ian becomes more rebellious and refuses to continue following under Adam's orders.

Due to the fact Adam had been betrayed by his father, Victor in the past, he does not (blindly) any individual, only those who have (rightfully) earned his trust, unlike Victor, he is capable of trust. Also, Unlike Victor, Adam is honourable, loyal and trustworthy; only towards individuals who (rightfully) deserve his loyalty and trust.

Unlike his father, Victor, Adam is wary when dealing with dangerous criminals, although he formed alliance with Ian Ward, adangerous criminal to take his father down once-and-for all, situations are different; Victor well was aware how dangerous Marco was, but he still (arrogantly) believed he could control him, which ultimately backfired, Adam on the other hand, was unaware of just how dangerous and unpredictable Ian was until it was too late.

There is also a dark side to Adam's personality, something that he developed after his father, Victor tried to ruined his life, when it comes to the Newmans, the Abbotts, (except for Traci and Colleen) their acquaintances (except for Katherine), and individuals he dislikes or despises for good reason.

Unlike the rest of his paternal family, Adam is never arrogant, selfish, self-righteous, power-hungry, amoral/immoral sociopathic, hypocritical, delusional and a bully, although he can be cruel, ruthless, manipulative and vengeful, but it is never directed at good/innocent individuals, also his vengeful nature is never to the point of being obsessive, as well as the fact that his cruelty is never to the point of being sadistic; as evidenced by the fact that he feels (genuine) guilt and remorse for most of his actions, regardless whether or not Adam believes these said actions are justified.

Victor Adam Newman Jr, was born to a Victor Newman and Hope Wilson. He grew up on a farm, believing Cliff Wilson to be his father. Victor would occasionally visit his son, posing a friend of his Hope’s. Victor Jr was incredibly smart and savvy in business. He attended Harvard where he graduated business degree, but did not leave his mother, who had fallen ill. Hope called Victor and they told their son the truth about his father. Hope died soon after, and Victor took his son back to Genoa City where he started going by Adam Newman.

Adam and his siblings did not hit it off well, and soon, Adam became resentful and his cunning, cruel, and manipulative side emerged. When Victor started turning against Adam, he teamed up with Victor’s nemesis, Jack Abbott, to frame him by forging a diary. When the plot was exposed, Adam was arrested and sent to prison. He injected himself with a substance that caused him to lose his eyesight and claim he had the same degenerative illness his mother had, so he could be released from prison.

Adam started gaslighting Victor’s wife, Ashley Abbott, causing her to fall down the stairs and miscarry their child. Wrecked wire guilt, Adam stole the daughter of his half brother, Nick Newman, and his girlfriend, Sharon Newman; and made it look like she was Victor and Ashley’s. After Nick and Sharon’s relationship fell apart, she and Adam got together, but he was eventually exposed. Facing prison time, Adam faked his death and ran off with his on and off again girlfriend from Harvard, Skye Lockhart.

Adam was eventually located in Vegas where he was arrested and brought back to Genoa City. Skye followed and hired Vance Abrams to represent Adam. She also persuaded Adam to marry her. Adam still carries a torch for Sharon, which angered Skye, who seemed to only want to be with Adam now because he was a Newman.

Skye went missing after an argument with Adam, and Adam was arrested for her murder. Sharon eventually located Skye in Hawaii, but she fell into an active volcano. Adam was released and Sharon was accused of murdering Skye and arrested. There seemed to be no hope for Sharon, so she and Adam planned to run away together. Instead, Sharon ran away by herself and was presumably killed in an accident.

Adam and the rest of Sharon’s family mourned her death. Sharon’s mother blamed Adam for what happened to her. A year later, Sharon was located and returned to Genoa City. During this time, it was revealed that Sharon was in a relationship with Sam Gibson. Heartbroken, Adam threw the memory card that Phyllis Summers had found into the lake, which would have cleared Sharon. He then planned a prison wedding wish Sharon where he dumped her at the altar, leaving her heart broken and humiliated.

Adam formed a friendship with grifter Chelsea Lawson, and helped her deliver the baby she had with Billy Abbott via rape. Adam supported Chelsea’s decision to let his half sister, Victoria adopt the baby. He was there for Chelsea when Jeffrey Bardwell lied about being her biological father, claiming she was his twin brother’s daughter.

Adam and Chelsea eventually became a couple and became pregnant with their own child. Chelsea miscarried after getting into a minor car accident with Adam’s niece, Summer. The strain of losing their child drove Adam and Chelsea apart and be and Sharon got closer again, which further drove a wedge between them especially after Sharon had a mental breakdown and burned the Newman Ranch and Adam lied to everyone about it, including Chelsea, which ended their relationship, but Chelsea had become pregnant again, unbeknownst to Adam. 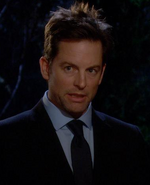 An amnesiac Adam looks at photos of his family and loved ones.

Adam wakes up and regains his memories after being shot.

Add a photo to this gallery
Retrieved from "https://villains.fandom.com/wiki/Adam_Newman?oldid=3378607"
Community content is available under CC-BY-SA unless otherwise noted.