Protect the Space Rider Roller Coaster from anyone at all cost (both failed).

Adam MacIntyre (more commonly known as Adam the Clown) is one of the bosses or psychopaths featured in the 2006 video game Dead Rising. He is also an optional boss in the main mode 72 Hours, who can be found on the first day at 9 p.m. in Wonderland Plaza in the Space Rider Rollercoaster during the scoop Out Of Control. He is a psychotic clown who has gone insane over the zombie apocalypse when he saw his audience, including children, being eaten alive. For this reason, Adam took control of the rollercoaster, trapping a mall employee Greg Simpson in it, killing anyone who dares to turn off the cable car because it keeps the zombies at bay.

He is voiced by John Kassir.

In Dead Rising 2: Off The Record, it is revealed that he has a younger brother Evan MacIntyre and is mentioned posthumously by Frank and Evan in the side mission "Snow Job".

Adam's story is very sad and tragic. Once a cheerful clown who worked at the Wonderland Plaza's play park, and amused the children of the mall's customers with his acrobatic shows. However, due to the zombie apocalypse, Adam witnessed many children being eaten alive by zombies, which left him with a mental breakdown and psychosis. Unable to cope with what he saw, he placed several bloody dolls on the seats in the Space Rider rollercoaster and kidnapped a mall employee, Greg Simpson, setting the coaster to full power, seeing that it scares away the zombies. Adam decided that he would kill anyone who tried to turn it off.

On September 19, at 9 p.m., Otis informs Frank West that the Space Rider Rollercoaster at Wonderland Plaza is running very fast as if it is out of control and tells him to go check on this suspicious situation as it could mean that there are some survivors there. Frank arrives at Wonderland Plaza and sees the coaster spinning with blistering speed. The man walks over to the control panel to turn it off, causing Adam to intervene immediately, laughing maniacally and juggling two chainsaws. Frank is speechless when he sees a crazy clown. Adam becomes sad at Frank's reaction, telling him that he thought he would be happy to see him just as everyone used to be happy to see him. Emotionally unstable Adam approaches Frank, with his small chainsaws still on, and starts a conversation with him, telling him about his life as a comedian entertaining people, and when the zombies showed up at the mall, everyone died, and so he decided to help the survivors by turning the coaster to full power that scared the zombies away from the sound source. Unfortunately, Adam managed to kidnap Greg Simpson and put him in the line refusing to let him go. Adam, believing that Frank wants to stop the coaster so that the zombies can wander around it again, decides to kill him.

After the fight, the defeated Adam falls straight on his small chainsaws, which quickly tear him apart and chop his insides, laughing maniacally. Frank almost vomits when witnessing this, but takes the coaster access card from Adam's corpse, freeing Greg Simpson from his prison.

Adam is fought in the typical manner of most Dead Rising bosses, where he attacks, leaving the player to counter attack. Adam however is unique in the fact that he can deflect bullets with his chainsaws, making firearms useless against him, and grounding the player to a melee strategy. 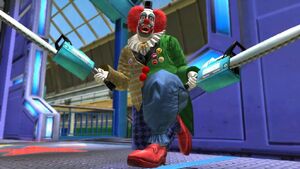 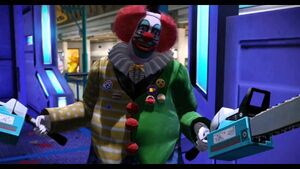 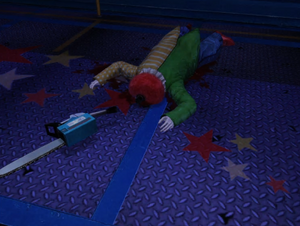 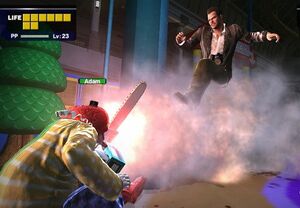 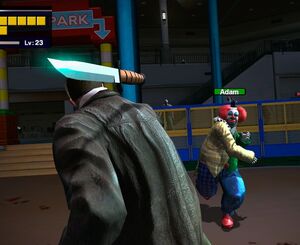 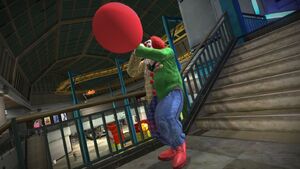 Adam blowing up a gas balloon. 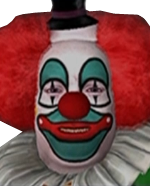 Photo of Adam in Frank's Notebook. 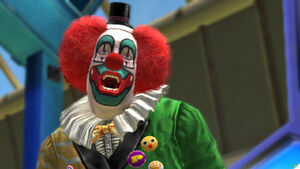 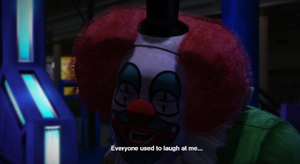 Adam introducing himself to Frank. 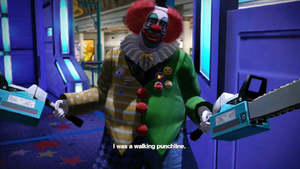 Adam with his small chainsaws. 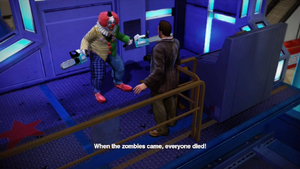 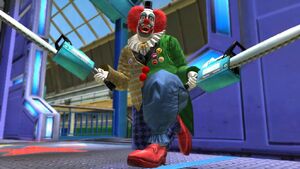 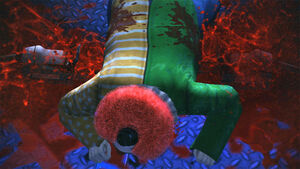 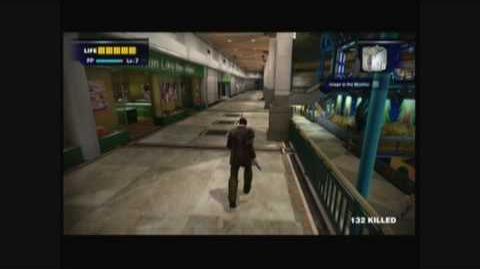