None (unless horribly oppressing her people can be counted as a hobby).

Return from her 17 years-old imprisonment and regain total control over the country of Esthar (failed).

Sorceress Adel (in Japanese: アデル, Aderu) (Italian: Adele) is a minor villainess in the RPG video-game Final Fantasy VIII. She is an immensely powerful evil sorceress, and the former ruler of the highly advanced country of Esthar. Though Adel is always referred to as a "she", her physical form is very masculine with a muscular frame with thick shoulders. She is said to be hermaphrodite in the French translation. In the game, Adel is used as a pawn by Sorceress Ultimecia, who needs her to cast the Time Compression spell.

Adel's most notable physical trait is her gargantuan size: she stands thrice (three times) or four times the size of an average human, which means about 23 feet tall, and she has the torso of a well-built, muscular male, which led to many debates concerning her gender.

Her red hair is tied into a long plait down her back, and her clothing consists of a headpiece, a black skirt with frock, arm bands, and a metallic structure, reminding one of an armor.

(Although this piece of clothing is often confused as being part of the multiple black intricate tattoos that adorn her torso and therefore creating the impression of her not wearing something to cover up her upper body.) Her skin is pure white and her eyes are of a crimson color matching her hair.

On her back, a set of her tattoos work together as a mirror-image of her wings. In the fighting sequence, the tattoo disappears and is replaced by an actual set of wings. Apparently, this happens whenever Adel summons her immense powers and intends to use them.

Adel's personality is mostly ignored throughout Final Fantasy VIII. She is actually quite the rarity in that, even when she is finally resurrected and fights the party while junctioned to Rinoa, she says nothing to the player.

She is said to be utterly cruel, brutal, arrogant, avaricious, power-hungry, uncontrollable, manipulative, diabolical, and ruthless. She has no morals and no sympathies; she is the epitome of pure evil. None of her actions in the game show anything more than this.

Sorceress Adel rose to power in the country of Esthar during the time period between the destruction of the Centra Empire and the advent of the Sorceress War. Precisely how she became the ruler of Esthar is unknown, although Selphie Tilmitt mentions similarities between the rise of Edea Kramer (while being possessed by Ultimecia) and Adel in her diary. It can be assumed that Adel cooperated with the former head of Esthar before taking his place forcefully.

17 years between the start of the story, Adel began the dreadful Sorceress War by invading the other nations, but the country of Galbadia resisted her and soon became the leading opposition force against her armies. The Sorceress' scientists devised the Lunatic Pandora, a gigantic weapon able to call forth thousands of monsters from the moon in a phenomenon called the "Lunar Cry" which she planned to use as her major asset.

They also devised a way for regular warriors to cast magic through the use of Guardian Forces, (powerful summoned creatures) to empower her soldiers. Ironically this method would be taught in every country after the war and would grant the protagonists enough power to face her.

Adel would indirectly cause her downfall when she had several young girls kidnapped all around the world to find her successor to pass onto her "kingdom", and, like many other different Sorceresses, her Sorceress Power. One of these girls was called Ellone and her adoptive father Laguna Loire set out to rescue her. Upon reaching Esthar, Laguna realized that no matter how many times he would bring Ellone back, Adel would always target her, so he agreed to help the people from Esthar to end the Sorceress' tyranny.

Given her immense level of power and defeating Adel was out of question, so they led her into a trap and managed to imprison her in a cryogenic cell which they sent to space. Laguna was then elected as Esthar's new ruler and he built a spacial station to watch over the Sorceress' "tomb" and ensure that she would never awake.

Few details are known about her rule, because it is rarely mentioned in Final Fantasy VIII. This is unsurprising, considering that in the end, Adel's own people rebelled against her, and to this day refuse to speak of her in more than hushed voices. Although Estharians have never elaborated on the enormity of the cruelties Adel had performed, it may be inferred that her atrocities were truly horrendous.

Sorceress Adel is essential for Sorceress Ultimecia's plan to cast the Time Compression and merge all eras into one. By having her body in her future, her spirit possessing Adel in the present and Adel's consciousness sent back into the past, she would have access to all 3 times and would be able to perform the ritual. To do so, Ultimecia needs Ellone, a young woman with the unique ability to send people in their own past.

After the protagonists who are members of the elite Para-Magic-using paramilitary organization known as SeeDs, defeated Sorceress Edea, Ultimecia's vessel, Ultimecia changes her tactic and possesses Rinoa Heartilly, the major female protagonist who accidentally received the innocent Edea's power after the battle. Ultimecia then puts her new host in a coma, knowing that her friends would bring her to Esthar, where Adel and Ellone are, the only place where they would find a remedy for her condition.

When the heroes brought the comatose Rinoa to the space station to be examined by Ellone, Ultimecia took control of her host and used her to awake Adel. Meanwhile, Ultimecia's agent Seifer Almasy activated the Lunatic Pandora and caused a "Lunar Cry" to bring her back to earth. Seifer later kidnapped both Rinoa and Ellone and offered them to Adel, who got possessed by Ultimecia as soon as she awoke. However, the protagonists managed to fight Adel and destroy her once and for all.

Adel has Rinoa Heartilly junctioned to her body and frequently drains her life-points to regenerate her own. The major difficulty being attacking her without harming Rinoa, which makes Summons and multi-targets attacks highly unadvised. It is also wise to heal Rinoa frequently and to cast defensive spells on her, as if she were to die, the game would be lost.

Adel uses Energy Bomber, a magical blast that deals heavy physical damage, and the five mightiest spells of the game: Holy, Flare, Quake, Meteor and the dreadful Ultima (the last three striking the entire party) so be prepared. Fortunately, she is rather slow and will attack very often if you play right, so take advantage of it. She takes two turns to cast Ultima so cast some protection before she unleashes it.

Adel appeared in Final Fantasy Airborne Brigade as an enemy during an event called "Showdown". In battle, Adel uses Ultima. 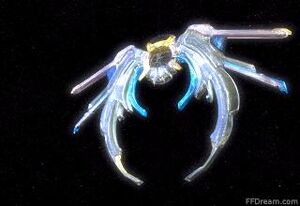 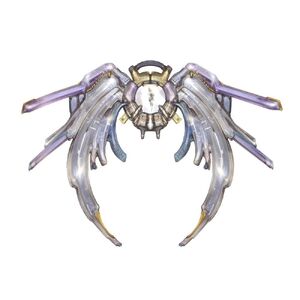 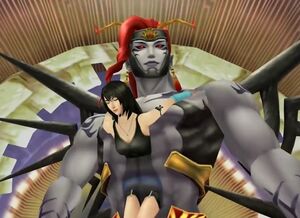 Close-up on Rinoa, fused onto Adel in the remaster.