Emperor of the Gamma

Eliminating anything he perceives to be unnecessary.

Usurp his father as Emperor.

Hypocritical Harbinger for Rebirth
Adel is a Gamma Ultima who later became the Grand Imperial Majesty of the Gamma and the main antagonist of Kamen Rider Ghost.

He is the second oldest son of Gamma Emperor Adonis and the brother of Alain and Alia. He is fanatically devoted to the Gamma ideology and willing to do almost anything to achieve his father's ideals, which ironically leads him to kill his father and usurp his place as Emperor of the Gamma.

When the energy needed to run the World of Gamma's life support system ran low, Adel proposed they invade the human world to obtain more power. The Gamma soon began plotting to shift the human realm to more resemble their own. In preparation for the plan, Adel traveled to the human world in the year 2005 and murdered the leader of the Ghost Hunters, Ryu Tenkuji, and also gathered the 15 luminaries so they could oppose the Gammaizers when the invasion arrived.

When his brother Alain returned to the Gamma World, he asked Adel why he had not informed him about the true power the 15 Ghost Eyecons possessed, but Adel simply told his brother that there was no point in obtaining a living human body and that the Eyecons were only useful as a weapon.

Adel was later informed by Igor that Alain had stolen the Mega Ulorder, but Adel opted to allow him to keep the device for now and observed what his brother was capable of doing with it.

He later tasked Igor with instigating the Demia Project, offering to have him appointed the new magistrate if he was successful.

Adel eventually decided to lead the Gamma himself and destroyed his father's Eyecon body and framed Alain for their fathers death. He destroyed his brother's Eyecon body to force him back into his original one and sent his forces to track him down and kill him. He also imprisoned his father's mortal body behind an invisible barrier and woke up Jabel and sent him to find and kill Alain.

When Alain and Takeru discovered the trapped Adonis while searching for Makoto's body, Adel appeared and killed his father right in front of the two.

Adel later merged with the remaining 11 Gammaizers to assume his Perfect Gammaizer form. He fought Ghost, Specter and Necrom and was ultimately defeated by the power of Mugen Damashii. Takeru offered that they work together to save both the human world and Gamma world, but Adel refused.

Alia later attempted to stop Adel as Kamen Rider Dark Necrom P, prompting Adel to deploy Gammaizers Planet and Climate to defeat her. Edith later tried to warn Adel that the Gammaizers may try to become self aware, but Adel ignored his warnings.

Resolving to create a utopia by becoming the world, Adel connected to the Great Eye with the power of his resolve and resurrected the 12 Gammaizers that had been defeated. He summoned them all in preparation for the Demia, and sent Gammaizers Fire and Wind to hold off the Riders while the Demia was activated, however, the two Gammaizers were defeated. Adel attempted to fight Ghost using Gammaizer Blade, but retreats after their minds begin overlapping.

Adel later engaged Takeru again and summoned the 15 Gammaizers to counter the 15 Damashii Parka Ghosts Takeru summoned but they are unable to stop them. Adel soon comes to see the error in his ways and realize his father still loved his family, and Adonis himself was actually heartbroken by the death of his wife and Argos. Unfortunately, it is too late for Adel, as the 15 Gammaizers finally reveals their true colors and forcibly merge with him to form Perfect Gammaizer again. Having no choice, Takeru is forced to defeat it, killing Adel in the process under his request at mercy kill. 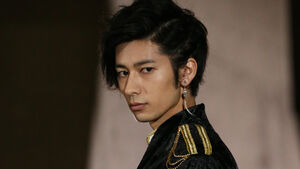 Adel as a Gamma Prince.
Add a photo to this gallery

Retrieved from "https://villains.fandom.com/wiki/Adel_(Kamen_Rider_Ghost)?oldid=4019805"
Community content is available under CC-BY-SA unless otherwise noted.