Evading herself and her son from possible assassination.

Adeze Oijofor, operating under the nom de guerre "Nne Obara", was a murderous African warlord who controlled a sizable chunk of the rare earth trade in East Africa. Over a past sixteen months, a French telecoms company has been making aggressive inroads in areas she control, with some success. She was also an ally to the ex-dictator Richard Ekwensi.

ICA information indicates that the target has withdrawn her paramilitaries to neighboring nations, as a part of a Fabian strategy. Her security was handled by a former Vlakplaas veteran, and it was believed that Oijofor had more than a professional relationship with.

After her illegal occupation over a mine owned by Globestar, the company signed up a contract with the ICA to eliminate her in Bangkok, Thailand. She is later eliminated by Agent 47.

Oijofor was an extremely alerting and paranoid person, who could see through nearly all of the outfits and disguises 47 wore except the suit, due to residing in the hotel for a month and had full awareness of being targeted. She was also overprotective towards her son, Kalu, due to such paranoia. This drove her to ruin every romantic relationship her son had, even planning to assassinate Kalu's new girlfriend to show him the world was a dangerous place. 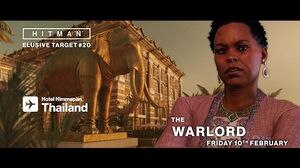 Retrieved from "https://villains.fandom.com/wiki/Adeze_Oijofor?oldid=4258224"
Community content is available under CC-BY-SA unless otherwise noted.