Eat the Slayer of Demons (failed).

The Adjudicator is a minor antagonist and boss in Demon's Souls.

At the Shrine of Storms, the first stage of the Shadowmen's ritual to appease the Storm King was for the dead to be judged by the Adjudicator. Then when the Colorless Fog arrived, the Adjudicator succumbed to the fog and mutated into a demon. The demon grew massive and fat from eating countless demon slayers who sought the Archstone of the Storm King. At some point in the past, the Adjudicator got half of one of his cleavers stuck in the side of his belly. It is unknown if this was accidental or intentional.

The Slayer of Demons encounters the Adjudicator at the end of the first level of the Archstone of the Shadowmen. They enter in a room above the Adjudicator's arena, with the demon watching them from above. While the player is able to attack from above, the Adjudicator can use his tongue to attack the player from afar, which also destroys a portion of the platforms. If the platform is damaged while the player is below it, debris can fall on the player dealing moderate damage. While on the Adjudicator's floor, he attacks by swinging his cleavers and sometimes his tongue. He can't be attacked with physical attacks, as his skin is too thick to slice through. However, his cleaver wound can be hit. If struck enough times, the Adjudicator will lose his balance and fall over, revealing his weakness, the golden crow on his head. The crow takes heavy damage, but the Adjudicator will get back up after a few seconds. Alternatively, the player can shoot the crow from afar using spells, arrows, or other ranged attacks.

Once the crow takes enough damage, the Adjudicator is defeated and he drops the Swollen Demon's Soul.

The Adjudicator is a large fat pale demon with his body covered in tattoos. He wears a crown with a golden crow on it and wields two large cleavers, albeit the left one is broken in half with the blade lodged in the demon's side. His head is blank with the exception of a mouth with a long tongue protruding from it. 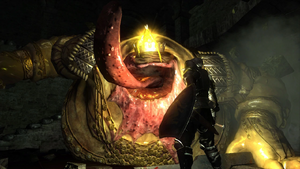 The Adjudicator about to attack with his tongue. 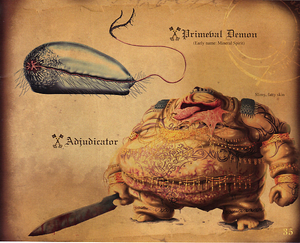 The Adjudicator in the official artbook. 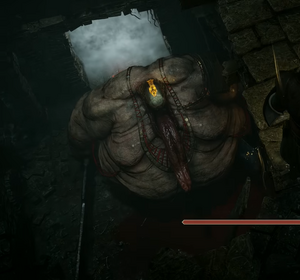 The Adjudicator as he appears in the PlayStation 5 remake of Demon's Souls. 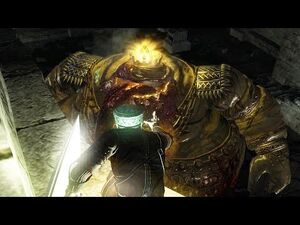 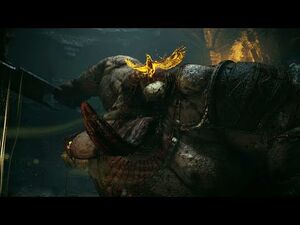 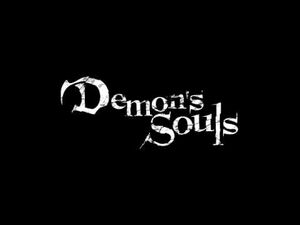