Pirate
Adjutant Booba is a member of the Great Star League Gozma and a supporting antagonist in Dengeki Sentai Changeman. He serves as one of General Giluke's two lieutenants as well as the rival of ChangeDragon.

He was portrayed by Yoshinori Okamoto, who later portrayed Doctor Ashura.

Booba was originally a pirate and the leader of his own Booba Space Pirates. He at one made a failed attempt to kill Star King Bazeu, resulting in most of his crew being lost and Booba himself force to join the Gozma.

Booba served under General Giluke alongside his fellow Adjutant Shiima on board the Gozma flagship, the Gozmard. When Bazeu set his sights on Earth, Booba led the Gozma's initial attack on Earth, only to be repelled by the Changemen. Over the course of his many battles with the Changemen, Booba would come to develop a rivalry with ChangeDragon.

After Giluke fell out of favor with Bazeu for his continued losses against the Gozma, Booba sought to aid his master in obtaining the Rigel Aura of Nana in order to improve his standing with the Star King, only for Queen Ahames to beat them to it first. After Giluke was thrown into a space graveyard by Bazeu as punishment for his failures, Booba and Shiima wound up serving under Ahames after Bazeu placed her in command of the Earth invasion. However, Giluke would later return as Ghost Giluke and regain his standing in Gozma by becoming Super Giluke.

With the Earth invasion at a stalemate thanks to the opposition from the Changemen, Super Giluke was granted permission by Bazoo to turn his own crew members into Space Beast Warriors. Super Giluke attempted to turn Booba into a Space Beast first but Booba refused and attempted to flee. He was chased down by Giluke, but before he could be transformed, Booba was saved by his former space pirate comrades Lady Pirate Jill. Jill brought Booba aboard his old ship and caused him to remember his time as a space pirate when the two ran rampant around the universe. While Booba fondly recalled his time with her, he refused her offer to leave the Gozma to be with her as he was still too fearful of Bazeu.

Jill and Booba's ship was later attacked by Super Giluke, who had not given up on making Booba into a Space Beast Warrior. Giluke's attack caused the ship to crash, killing Jill. It was then that Booba discovered he had been sold out by Bubuka, who sided with the Gozma. A furious Booba then attempted to duel Giluke, but their fight was broken up by Bazeu. Before returning to the Gozma forces, Booba would make a burial for his old comrade.

Eventually, Booba became fed up with the Gozma after Ahames plotted to use the anti-Amanga energy of the Space Beast Warrior Daryl to create a reaction with the Amanga energy of Shiima, destroying the Changemen at the cost of both their lives. Before Ahames could go through with her plan however, Booba struck down Shiima with his "Booba Killing Sword", eliminating the Gozma power connection within her under the cover of simply dealing with a traitor. Booba then turned his old rival Change Dragon to have a final duel with him in order to obtain a proper death in combat.

In a climactic finish, Booba was struck down by Change Dragon and fatally wounded. It was then that Shiima arose and turned back to her form as the princess of planet Amanga, revealing that Booba had freed her from Gozma's influence instead of killing her. Shiima went to comfort the dying Booba, who told her that she was too pretty for him to let die and that she was needed to restore her homeworld. Booba then got up and raised his sword in defiance at the Gozma before exploding, dying on his own terms. Following Booba's death, the Changeman and Shiima created a grave for him which they marked with his sword. 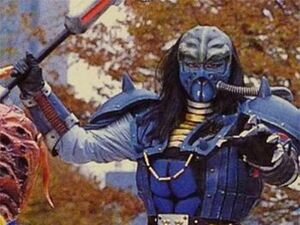 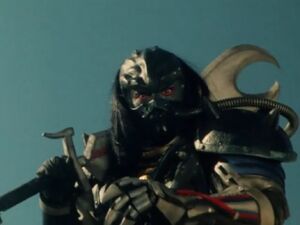 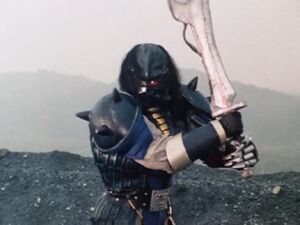 Booba raises his sword to duel against Super Giluke.