Adjutant Shiima is a member of the Great Star League Gozma and a supporting antagonist in Dengeki Sentai Changeman. She serves as one of General Giluke's two lieutenants. Despite being a female, she speaks with a masculine voice due to being brainwashed by Gozma.

She was portrayed by Kana Fujieda and voiced by Michiro Iida, the latter of whom also portrayed Hunter Killer in Space Sheriff Gavan.

Shiima was originally the princess of Planet Amanga. As part of a ceremony for raising princesses on the planet, Shiima was taken from her mother as a baby and raised by the Space Beast Uba, who possessed milk that would help her grow up. When the Gozma invaded her planet, Shiima was recruited into the Gozma's military and brainwashed to forget her happy memories of her mother, causing her to develop a cold personality devoid of compassion that made her fit to serve in the Gozma.

Alongside Adjutant Booba, Shiima served under General Giluke and took part in the Earth invasion he led. She aided Giluke in his attempt to claim the Rigel Aura of Nana to power himself up, only for Queen Ahames to obtain it first. After Giluke was disposed of by Star King Bazeu for his continued failures, Shiima and Booba served under Ahames when she was appointed to take command of the Earth invasion.

However, Giluke would later return after fusing with a Space Beast Warriors to become Ghost Giluke to take revenge on both the Changemen and Gozma for his death. Though Bazeu was impressed enough by Giluke's survival that he permitted him to rejoin Gozma, Ahames saw him as a threat and ordered Booba and Shiima to find a way to dispose of him. The two attempted to stop Giluke from reawakening Nana's Rigel Aura, but were unsuccessful as Giluke succeeded in fully reviving himself as Super Giluke. Shiima later attempted to ambush Giluke with the Space Beast Warrior Galga, but was repelled by Super Giluke and lost her memory in the process. With her memory gone, Shiima began showing a different, kinder personality from her typical one, befriending the Changemen and spending her time playing with children. Though the Changemen were wary of her on account of her being an enemy commander, Tsurugi believed her kind personality be her true personality. However, Booba would later cause Shiima to regain her memories and become old self again, causing her to return to Gozma.

As the Gozma's invasion continued to exhaust their resources, they began resorting to more desperate measures, including turning their own members into Space Beasts. This included Shiima, who was transformed into the Space Beast Zuune by General Giluke. The Zuune attacked the Earth by using its powers to turn pebbles into diamonds, causing humans to fight over them. It was soon confronted by the Changeman but managed to fight them. However, it halted its attack when it heard Navigator Gator's son Waraji playing the "Song of Nostalgia" on his ocarina, leading Shiima to partially regain her personality and remember that she was princess of Amanga. This led Super Giluke to interrupt Waraji's song playing, causing the Zuune's personality to take over again. Despite this, the Changemen took notice of the effects Waraji's song had and had him play it again, causing Shiima to separate from the Space Beast Warrior. While Shiima returned to the Gozmard, the Zuune was destroyed by the Changemen.

Following the defection of Gator, Shiima began to doubt her loyalty to the Gozma and began to desire to be princess of Amanga once again. When questioned about it by Booba however she refused to give a response. Shiima would later find herself being used by Ahames in a scheme that involved the Space Beast Daryl, whose kind had played a part in the ruining of her homeworld. Ahames planned to use Shiima's Amanga energy and Daryl's anti-Amanga energy to create a reaction being powerful enough to defeat the Changemen, at the cost of both their lives. Though Shiima was reluctant to give up her own life, especially since she would be working with the kind who ransacked her world, she was left with little choice other than to go along with it. However, the plan was thwarted when Booba used his sword to destroy the Gozma's brainwashing over her and regains her memories, reverting her to her princess form and giving her a normal voice. After Booba faced Change Dragon in a final duel and was wounded, a tearful Shiima comforted Booba in his final moments. Booba told Shiima she was too pretty for him to let die and encouraged her to go rebuild her homeworld, before dying on his own terms as a final act of defiance against the Gozma.

Shiima then joined the Earth Defense Force and assisted the Changeman in their final battle with Bazeu and the Gozma. When the EDF base was attacked by the Space Beast Warrior Maze, Shiima joined the Changemen, Yui Ibuki and Nana in repelling the attack. She later hijacked the Gozmard along with Yui Ibuki and the Gator family and used it to track down Bazeu's true location. Following the death of Bazeu, Shiima returns to space on Shuttle Base with many others aliens who had fled to Earth from the Gozma, deciding to dedicate her life to restoring the worlds the Gozma had ravaged. 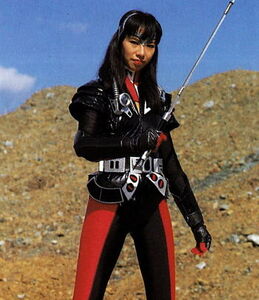 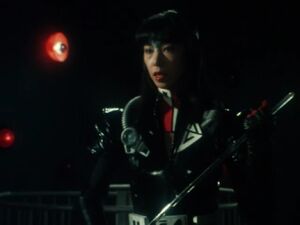