Conquering worlds in the name of Warstar.

Conquer the Earth in the name of the Warstar Insectoids.

Admiral Malkor is the leader of the evil Warstar Insectoid army and the main but later turned secondary antagonist of Power Rangers Megaforce. He is most noteworthy for being the second most powerful enemy to the Mega Rangers only to Emperor Mavro. He is armed with a moth-like axe and has abilities such as a meteor strike and the Planet Strike.

He was voiced by campbell cooley.

As the first strategy for the invasion towards Earth, Admiral Malkor sends Creepox to investigate. He ensures that the insectoids are the future and humans are not a problem. Realizing the existence of the Power Rangers, Admiral Malkor calls Scaraba to defeat the humans. Later, Admiral Malkor summons Yuffo to find the humans' weakness. When Yuffo fails, Admiral Malkor orders Vrak to send the Zombats to make the monsters grow.

Vrak offers his latest monster, Virox, to transform humans into a mindless army of Loogies to rule the planet in days. Admiral Malkor decides to see if the Vrak's plan works. To demonstrate that the complicated Vrak's skills are useless, Creepox decides to take over with a new plan to defeat the Rangers and impress Malkor, then calls upon the speedy Dragonflay. Sarcastically, Vrak mocks the failed plan of Creepox, and sends his Zombats to grow Dragonflay, but to no avail.

Malkor starts to get frustrated with failed plans and calls the royal alien Beezara who has a great reputation. Beezara fails in bid to beat the Rangers, and she's destroyed. Frustrated because his subordinates have done nothing more than delay their invasion plans, Malkor calls a new ally: Dizchord. Malkor is a big fan of the Dizchord's music, and sent to Earth to torment humans with his music. Vrak is sent to Earth to keep Dizchord on track and comes up with a even more devious plot: a satellite that makes the Dizchord's music be transmitted around the planet, but the plan fails. Malkor grows angry at Vrak's failure and prepares for a full-proof plan.

After the destruction of Creepox, Malkor sends Vrak to recruit Bluefur and Bigs into their ranks.

Later on, Malkor had worried that Robo Knight has been interfering with his goals and initially wanted him to be destroyed but until agreeing with Vrak's solution with capturing and reprograming him into the Warstar side. After the Toxic Mutant, Psychotick's defeat, Malkor had scolded Vrak for the failure but still has complimented on the concept of making Robo Knight their minion and that the mutant is to blame and then believes that Vrak has a problem that he must solve on his own.

After the Toxic Beasts' deaths, he and Vrak discuss about their past allies being destroyed and mentions about finishing their missions before Prince Vekar's Armada arrives and has resorted to be laying in his cocoon to become powerful while Vrak takes command for him but Malkor didn't know that he was planning to usurp him.

In The Human Condition, Malkor awakens from his cocoon and is determined to destroy the Mega Rangers. After a heated battle, Malkor is defeated by the Ultra Gosei Great Megazord.

In The Messenger, he was seen in one of the clips of Vrak's memories during his repair. 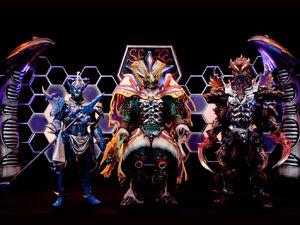 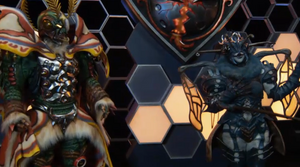 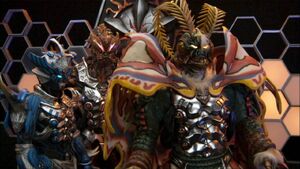 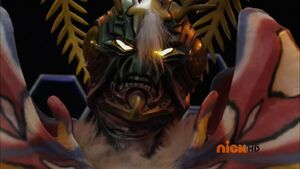 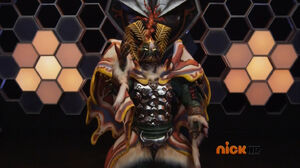