Admiral and commander-in-chief of the Helghast Military

Fighting Stahl to earn the title of Autarch.

Proving his strength as commander-in-chief.

Admiral Orlock (simply known as Orlock) is the commander-in-chief of the Helghast Military and the secondary antagonist of Killzone 3.

He was once of the trusted advisor to Autarch Scolar Visari and was the second in command of the Helghan Empire until the death of Visari. He led the Helghan nation following Visari's death during the ISA retreat from Helghan and for the rest of the Second Extrasolar War. From there Orlock and the High Council led the Helghast people constantly battling Jorhan Stahl for the title of Autarch and won the title until he was betrayed by Stahl and killed over Helghan.

He was voiced by Ray Winstone, who also played Soldier Sam in the UK version of The Magic Roundabout, Arnold French in The Departed, George McHale in Indiana Jones and the Kingdom of the Crystal Skull, Ares in Percy Jackson & the Olympians: The Lightning Thief, Bad Bill in Rango, Tubal-Cain in Noah and General Dreykov in Black Widow.

Orlock was born in the slums of Pyrrhus during the Great Depression. He grew up in poverty and became a strong fighter probably to protect himself from muggers and thieves. He trained himself to be a skilled streetfighter prior to Visari's rise to power and soon joined the Helghast military years later. He quickly developed a reputation of brutality when in battle being ruthless in battle against his own troops and the enemy. His skills proved him worthy of being Admiral and was granted the title by Autarch Scolar Visari and became one of his trusted advisors personally appointed by himslf. During the ISA invasion of Helghan, Orlock transferred the safety and security of Visari over to Colonel Mael Radec as Orlock began to coordinate Helghan's defenses however Radec was killed along with Visari leaving the leadership transferred over the the High Council. Orlock had tried to eradicate all of the remaining ISA troops only to have them leave the planet successfully and Stahl to use it to make him look bad. 6 months after the invasion and Orlock remains in conflict with Stahl and begins to loose control as Stahl and his influence from Stahl Arms begins to whoo over supporters from the High Council but is foiled following the failed execution of Commander Jason Narville and soon he becomes Autarch. Stahl out of rage caves into the demands of Orlock to turn over all of his weapons and himself to his authority only to be horrified by Stahl ordering his cruiser to fire upon the invasion fleet for earth to have the senate beg for mercy and have Stahl be crowned Autarch. In response a quick battle insured between Stahl, Orlock, and the troops they brought with them and all the security guards were killed and orlock was finished off but not before warning Stahl that his actions are leaving the planet defenseless.

Orlock looks like he is in his 40's (appropriate since he's 43) and has a bald head and a mustache. He wears a large black jacket covered in military medals and has black gloves. He is immune to the atmosphere so his face is revealed and he has a yellow-greenish mixed face.

Orlock is an evolved Helghast, making him immune to Helghan's atmosphere like all other Helghast leaders. He is a pious, devout, righteous, reverential, compromising, and empathetic patriot/leader who was a close friend of Visari. He can go off harshly especially when provoked by Stahl, as he refuses to negotiate with the enemy. He is not without morals however as he was exceedingly horrified by Stahl's decision to kill everyone on earth and leave Helghan defenseless and saw how Stahl carried on without hesitation or regret. 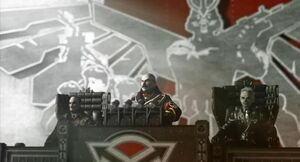