Overlord of the Gogol Empire

Become the ruler of the universe

Admiral Perry (in Japanese: ペリー提督 Perī-teitoku) is the main antagonist of Space Dandy and the ruler of the Gogol Empire, which is currently at war with the Jaicro Empire for control of the universe. He has sent Dr. Gel to capture Dandy, claiming he is the key to the future of the universe.

Admiral Perry has a very unique and distinct appearance. His head is a flaming, floating skull with miniature planets orbiting it. On his skull he has what appears to be a crown, which could signify him being the ruler of the Gogol Empire. He has a long purple collar with white shoulder pads that have red material coming from it.

In his true human form he is an average looking old man with grey hair wearing a dark suit.

Admiral Perry has shown to be a very serious individual with anger issues. He has no sense of humor. Dr. Gel describes him to be a cheap person, because whenever something is destroyed he has to pay for it. 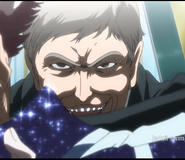 Side shot
Add a photo to this gallery

Retrieved from "https://villains.fandom.com/wiki/Admiral_Perry?oldid=3756984"
Community content is available under CC-BY-SA unless otherwise noted.