Admiral in the Separatist Navy

Military Commander in the Corporate Alliance

He was a Harch male who served as a member of the Corporate Alliance sometime both before and during the Clone Wars. After the conflict had broken out, he joined the Confederacy of Independent Systems and served as an admiral of the Confederate Navy. An unrelenting veteran and skilled military commander, Trench was feared by many and waged a strong campaign against the Galactic Republic and survived numerous deaths throughout his military career.

He was voiced by Dee Bradley Baker, who also voices all clones in the same series, Admiral Kassius Konstantine in Star Wars: Rebels, Klaus Heissler in American Dad!, and Bubble Bass in SpongeBob SquarePants.

At one time in his military career, he fought in the Battle of Malastare Narrows. Trench and his fleet tore each ship apart until the Jedi Task Force arrived. His ship was destroyed and everyone thought he was dead. That was until the Blockade of Christophsis during the Clone Wars.

In the decade before the Clone Wars had began, Trench was a mercenary who was hired by the Corporate Alliance and served as a military commander for their naval forces where he attacked numerous pirate settlements at Ord Namurt, Engira, and seized the Kurosti Merchant Fleet during a daring raid at Propsera Jang. In 34 BBY, Trench became the mastermind of the Battle of Malastare Narrows where he would make military history. The Corporate Alliance had blockaded Malastare to force the planet to negotiate over fuel allocations and Trench was given command over the fleet.

Trench made his mark on galactic military history as a commander for the Corporate Alliance. When the Alliance decided to blockade Malastare Trench was placed in command of the fleet the corporation provided and succeeded in defeating all the the ships sent against him. Wullf Yularen who was one of the few survivors of the battle recounted that the Harch Admiral's leadership was devastating. It would only be through the intervention of a Jedi lead taskforce that the Corporate Alliance blockade was ended. The Jedi defeated Trench's forces by destroying the Admiral's flagship while Trench was believed to be onboard. However the Harch naval genius in fact survived to reappear during the Separatist blockade over Christophsis.

After the initial victory over the forces of Whorm Loathsom and the Retail Caucus, the Republic launched a relief effort for the people of Christophsis. The mission to help the Christophsians was led by Bail Organa, the Senator representing Alderaan. Unfortunately, the planet fell under attack from Admiral Trench and his forces. Trench's first priority was to cut off any supplies to the relief effort on the planet below, commanding his fleet from his very own war-painted Providence-class destroyer, the massive fire power of his cruiser allowed the Admiral to cripple any attempt by incoming supply ships to get to the surface. Such an attempt was made by Anakin Skywalker and his cruisers, the Jedi were met with suppressive fire from Trench's destroyer and were forced to retreat behind the moon of Christophsis.

While the Jedi retreated and regrouped, Trench felt he had won the round he ordered his troops not to follow the enemy, but to recycle their shields and allow the cannons to recharge to full power. The Admiral, satisfied with the proceedings, sat back in his seat at the bridge and calmly awaited for the return of the enemy ships. The Republic's counter-attack eventually came in the form of a Stealth ship, piloted by Anakin Skywalker himself and Admiral Yularen. Not knowing of the cloaked ship, Trench became impatient and ordered a number of Hyena-class bombers to attack the surface, particularly the command center of Bail Organa. The bombing was planned by Trench to draw out the hiding Republic "cowards", as he put it. Although the stealth ship was undetected by the Admiral, Trench suspected that there was something odd going on. His suspicions proved correct, when Anakin's ship presented itself and fired its torpedoes at Trench's cruiser. Unfortunately, the maneuver had little effect. Admiral Trench reacted quickly and raised his ship's thermal shields.

Angered by this act of foolishness, Trench responded by firing his own torpedoes at the stealth ship. Skywalker managed evade the torpedoes by ordering flairs shot in four different directions. As a result of the successful trick, Anakin Skywalker saved himself and his crew for now. After the engagement, the stealth ship went into hiding again. Unsure where the targeted ship was, the furious Admiral fired a spread of lasers, to no avail. Skywalker managed to navigate the "wave" of laser fire. Seeing how the short skirmish played out, Trench was now sure that they were not dealing with near clone pilots but with a Jedi. After which he patched a transmission on the comlink channel, so that he could present himself to his adversaries. Threatening the crew of the stealth ship and advising them to retreat while they still could.

Trench ended the transmission with a warning that he would be their doom. Trench prepared himself for the Jedi's second offensive, as he knew they would. Eventually the cloaked vessel revealed itself, but this time they had knowledge of Trench's tactics with ship cloaking devices. Trench tracked the magnetic signatures of ships so he could follow them and destroy them. The Stealth ship opened fire upon Trench's flagship, the attack itself was only a diversion and Anakin's ship again cloaked itself. Trench then locked on to the ship's magnetic signature and ordered his Tactical droid to fire a torpedo at the source of the signature on his command. He was forced to lower his shields to do so. His droid advised against the move, but in a moment of compulsive anger Trench ordered to fire and the torpedoes were launched.

This had been the moment Skywalker was waiting for: the stealth ship, with torpedoes on its tail, turned around and headed towards the bridge of Trench's command ship. Surprised by the bold attack, the Admiral ordered the shields to be raised back up. Alas, the shields weren't recharged to full power and the ship was left defenseless. Trench was caught off guard and now seeing the Republic ship speeding towards him, the Admiral didn't know what to do and how to react. Accepting his defeat, he closed his six eyes and awaited his demise. The Stealth ship flew right over and the torpedoes slammed straight into the bridge, destroying Trench's flagship, and bringing chaos to the blockade. At that crucial moment, one of the most successful Confederate fleet Admirals lost for the Separatist cause.

Two years later, Trench survived the destruction of his ship. However he had to get cybernetic replacements for one of his eyes, parts of his flesh, a tusk and several of his arms/legs. Trench, the station's commander, watches the battle from the command center as the Republic continues to gain ground. However, Tup relapses into his strange feeling, and becomes extremely focused on Tiplar. Before the Jedi Master can figure out what is happening, Tup shoots her at point-blank range. Fives quickly tackles Tup, but Tiplar's death coupled with droid reinforcements causes the Republic to lose their advantage, and they are forced to retreat.

After replaying the events of the battle, Trench contacts Count Dooku to tell him of Tup's erratic action. Trench, however, knows that Tup was not acting in free will, like one clone had done before. Dooku is very concerned, as this means that one of his Master's plans is going wrong. He contacts Sidious, who tells him to apprehend Tup immediately.

Admiral Trench orders an assault on Anaxes and sends more troops to deal with the clone infiltrators. He attempts to exit the command bridge but is blocked by Anakin, who strikes down his tactical droid and several BX-series droid commandos with his lightsaber. Anakin then demands that Trench reveal the final number in the sequence to disarm the bomb, but the Admiral only taunts him. In response, Skywalker severs his left set of cyborg arms and reiterates his demand. Trench complies and Anakin reveals the final number to Windu who is then able to disarm the bomb. Trench attacks Skywalker with his electrostaff-cane he had in his organic right set of arms but the Jedi impales him with his lightsaber. 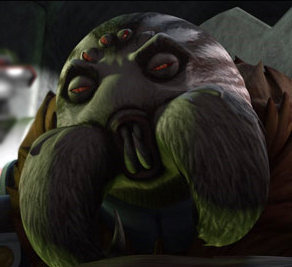 Admiral Trench before his injuries at the hands of Anakin Skywalker. 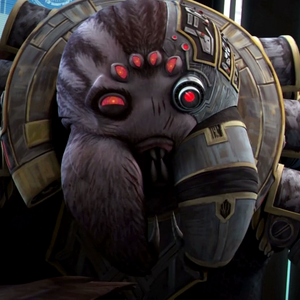 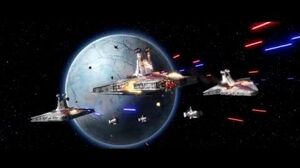 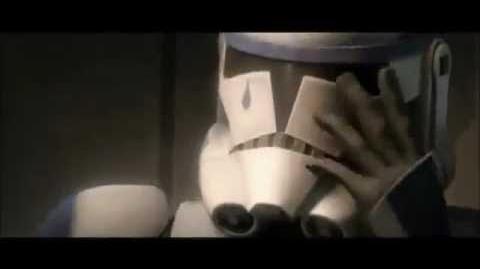