Agent of the ghost office (as Daalor)

Get rid of Hui Buh

Adolar or Daalor is the main antagonist in the German comedy movie Hui Buh.

He was portrayed by Nick Brimble and voiced by Kaspar Eichel.

In the book, Adolar is only said to be the knight who's responsible for the transformation of the knight Balduin into the ghost Hui Buh. Only in the book "Hui Buh fährt Geisterkarussell" he's called Adolar for the first and last time after Hui Buh, who during the majority of the book, tries to get revenge for his curse by chasing the descendants of the knight Ottokar, eventually realizes that the knight responsible was actually Adolar. However, he himself does never make an actual appearance in the books.

In the movie, Adolar is not responsible for the transformation, Balduin only says "I'll shall be cursed if I tricked you!" after he, Adolar and Ottokar played cards and won, only to be revealed as a cheater by Adolar. Afraid of Balduin's ghost form, Adolar walks backwards to a window and falls to his death. Later, after king Julius CXI. burned Hui Buh's license for haunting, an officer from the Geisterbehörde (in engl.: Ghost Office) called Daalor arrives and tells Hui Buh that he's got one night to reiterate the license test. When Hui Buh already did the theoretic part by cheating, Daalor almost catches him and Julius, who was disguised as a ghost. Later, on Burgeck, when Hui Buuh prepares for the practical part, Daalor appears and takes off his mask, revealing himself to be the ghost of Adolar (Daalor is the anagram of Adolar) and forces Hui Buh to go to the "Soul soup", the only place to kill a ghost, by threatening a boy Hui Buh became friends with. Later, Julius' fiancee Countess Etepetete reveals that she's Adolar's great-granddaughter and joined forces with her ancestor. Julius' castle was once in the hands of Adolar, but he lost it when he gambled it against Balduin. After a sword fight with the returned Hui Buh, he is finally arrested along with Etepetete, who had become a ghost herself when she was crushed in a collapsing tunnel, by the real ghost-officers for their crimes. When he is taken away, he claims that he would come back.

In one CD from another radio play from Hui Buh which story's happen after the movie, he returns and forces another ghost to steal the ghost book which gives great powers to ghost. First, he summons a fallen army from their battlefield and forces them to attack the castle. He finally gets tricked by Hui Buh and is transforms into a bird which flies away.

Adolar is the most sinister character in the movie. Given that all the other ghosts, despite the fact they became ghosts for committing evil deeds in their lives, are actually good guys, Adolar still kept his evil personality. He once mentions how much he missed the ability to kill (something that ghosts in the cinematic universe of Hui Buh can't do) and even refers to it as a "wonderful ability", implying he has a very sadistic side. He's also described by Hui Buh as being a cruel ruler when he was alive, tormenting his servants. 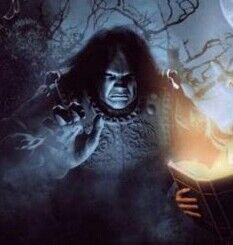 Retrieved from "https://villains.fandom.com/wiki/Adolar?oldid=3074487"
Community content is available under CC-BY-SA unless otherwise noted.