Adolf Hitler is an antagonist from the Dynamite comic book franchise Armoogeddon. He is a German WWII dictator, who created and led the Nazi party to destroy the Jewish population. Although he appeared and was mentioned several times in Brickleberry, he didn't serve his first major role until the comics. Woody Johnson idolizes him and derives much of his inspiration from him on how to run Brickleberry National Park.

In "Gay Bomb", Kirk Sanders showed Connie Cunaman a video of Adolf Hitler back in WWII. There, Hitler was leading his Nazi party through war and having them march the streets of Berlin, killing Jewish people. During one of his speeches, American soldiers dropped a gay bomb on him and turned him both cowardly and homosexual, who ended up making out with one of his Nazis. This weakening of Hitler, made him into a pathetic weakling, who was unable to fight the war, which would be one of the component that would ultimately lead to his humiliating loss and later, his self-inflicted death.

In "The Dam Show", Woody revealed that Hitler inspired him to become a leader in the first place, explaining why he runs Brickleberry National Park in such a brutal, hateful, wrathful, and openly bigoted manner. He said that like other great leaders such as Kim Jong Un, Saddam Hussein, and Muammar Al-Gaddafi, Woody took a page from Hitler's playbook in learning that he should throw a party for himself that would celebrate his own greatness and self-importance.

In "My Favorite Bear", Steve Williams and Ethel Anderson watched a man die on a Flamey the Bear show and Ethel worried for his well-being. Steve assured her that he was, in fact, dead but at least he died doing what he loved, like Hitler.

In "Armoogeddon, Part 3", Future Bobby chased Future Steve through time, trying to steal back the time traveling stick so that he could destroy all of time once and for all. One of the places in history they traveled to was Berlin, 1944, where Hitler was in the bathroom, shaving his mustache and singing Rheinlegendchen. At this time, Hitler actually had a giant furry mustache that stretched across his whole face but when Steve, Bobby Possumcods, and Woody ran by, they knocked into him and made him shave off the sides of his mustache, turning it into the better-known toothbrush mustache. Angered that they ruined his mustache, Hitler cussed them out in German but before he could even get revenge on them, they time travelled away, leaving him to decided that he would take out his anger on the Jewish instead. 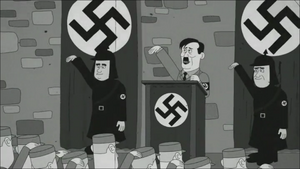 Adolf Hitler after being blasted by his gay bomb. 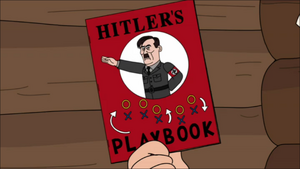 Hitler's appearance in the Armoogeddon comics.