Adolf Hitler was the one-time ruler of Nazi Germany, leader of the Nazi Party and one of the most infamous tyrants of the 20th century - in DC comics he is largely the same as his historical counterpart but had access to the mystical relic known as the Spear of Destiny, which was the reason many American superheroes (especially those with magical origins) could not actively oppose Hitler and his army during the Second World War.

During World War II, Hitler was replaced as Führer (leader) by Vandal Savage, who had awed the German high command with radically advanced weapons, supposedly of his own invention. The weaponry had actually been sent back in time by Savage's older self, along with instructions that Hitler's continued leadership would lead to German defeat unless he was deposed. In order to neutralize Hitler as a possible source of opposition, Savage had Hitler cryonically frozen.

After Savage, and a good portion of the German army, was lost in an attempted air invasion of the U.S., General Hoffman, an outspoken critic of Savage on the High Command, immediately moved to have Hitler removed from stasis and restored to power.

The character who appears in "The Savage Time" is never named, but his resemblance to Adolf Hitler is clear. The historical Hitler was elected Chancellor of Germany in 1933, and later styled himself Führer and committed Germany to a plan of military conquest that resulted in the Second World War.

Savage's advice to his younger self reflects the judgment of most historians: that Hitler's leadership was, in the long run, disastrous for the German war effort. Among his most criticized decisions was his invasion of Soviet Russia, and his insistence on personally overseeing several campaigns from his military headquarters, rather than leaving the details to his more experienced generals.

General Hoffman's description of Hitler as being "a little crazy, but [having] more respect for his generals" than Savage, clashes with the historical record. Hitler was famous for his reverence of the German military (in which he served during the First World War) as an institution, but during the war he was notorious for rejecting the often-sound military advice of his general staff, usually with catastrophic consequences. His two closest military advisers, Field Marshals Wilhelm Keitel and Alfred Jodl were essentially yes-men who carried out his questionable military orders without comment or objection, and these were the main reasons Hitler valued them.

Hoffman's faith in Hitler seems to foreshadow that Germany will lose the war after all, and the Justice League's mission to restore the normal timeline has succeeded. 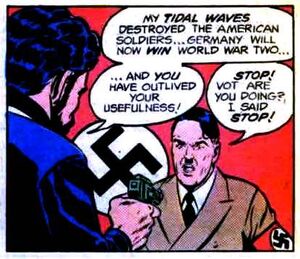