Adolf Hitler was the main antagonist of Danger 5.

Each episode starts out with the Danger 5 team being briefed by their commanding officer on Hitler's latest scheme to control the world. These plots are usually extremely outlandish, ranging from building an army of dinosaurs to turning people into androids. The missions usually involve trying to thwart Hitler's plans, but killing Hitler is always top priority.

Each time Hitler is thwarted, he will be backed into a corner by the Danger 5 team, only to jump out of a conveniently-placed window and escape capture (this is always shot with the exact same footage of Hitler breaking through a window).

In the series 1 finale, it is revealed that Hitler managed to clone himself, so even when the Danger 5 team seemingly fulfills their mission and kills him, there is no real guarantee that he is truly dead.

Hitler returns and kills the Danger 5 Colonel. The team reassemble to track him down, only for Hitler to murder one of their own and escape. Hitler then masquerades as several different aliases in an attempt to make it seem like Danger 5 are attacking innocent civilians. When Hitler is finally killed, he takes over Hell and causes all the Nazis to come back as zombies. Hitler then transfers his soul into an immortal teenager named Holly and goes back in time to WWII. While there, Hitler meets up with his past self and gives him his immortality. Hitler's soul bonds with Past Hitler and with his acquired knowledge of the future, manages to change the present for the worse. Danger 5 confront Hitler, who has since upgraded his still-aging body with a cybernetic one and manage to destroy him once and for all.

The Danger 5 Hitler is strongly based on the real-life Hitler, but depicted as a power-hungry supervillain archetype. He is foul-tempered, but also cunning and manipulative, able to gain the support of several nations in his bid to take over the world such as Italy, Japan and even Atlantis. This ability even extends to Americans when he hides among them. Despite his connections, he's extremely disrespectful towards his allies, occasionally urinating in their faces for a laugh. He also shows a lecherous side when it comes to blonde women (an obvious parody of Hitler's obsession with the Aryan race). 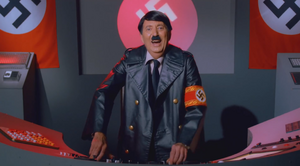 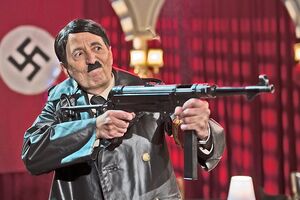 Hitler with his machine gun 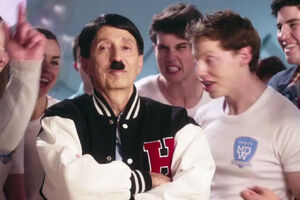 Hitler in the '80s High-School Jock 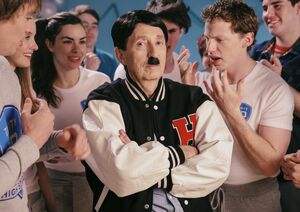 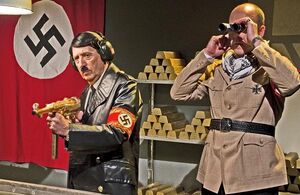 Hitler in his Treasure Room 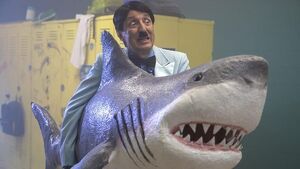 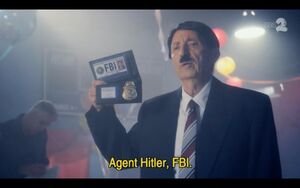 Hitler as the F.B.I.
Add a photo to this gallery
Retrieved from "https://villains.fandom.com/wiki/Adolf_Hitler_(Danger_5)?oldid=3531904"
Community content is available under CC-BY-SA unless otherwise noted.