Adolf Hitler is the leader of Nazi Germany during World War II and one of history's most reviled dictators, unsurprisingly this would mean he was the main antagonist of almost all WW-II based media (except, of course, that controlled by the Axis Powers) - Disney was no exception to the rule and Hitler was depicted in several cartoons of the period.

The two most famous cartoons depicting Hitler were "Education for Death" and "Der Fuehrer's Face" - each depicted Hitler and his regime as enemies of the world, though in different ways - Education for Death showed a dark and tragic tale of a young boy growing up under Hitler's tyrannical rule whilst Der Fuehrer's Face was a more bold mockery of Hitler himself and how he had enslaved the nation whilst promising them to "never be slaves".

Hitler is also depicted in a scene in the short "Reason and Emotion". He is shown with babbling dialogue, and destroying (or merely weakening) Reason by preying upon Emotion's weakness with fear, sympathy, pride and hate.

Der Fuehrer's Face is one of Disney's most famous WWII cartoons and depicted Donald Duck as a reluctant Nazi living under the rule of the Nazi Party - Hitler's presence was everywhere and the dictator continually tormented Donald Duck by forcing him to give the Hitler salute every time he saw a picture of Adolf Hitler.

Donald Duck was also forced to work in a war-factory for many hours making weapons for the Nazi cause, to further torment him images of Hitler were periodically placed on the production-line: forcing him to salute Hitler whilst also struggling to keep up with the demands of the factory.

In the end however Donald Duck is free from his nightmare, which was shown to be a bad dream and he embraces a small figurine of the Statue of Liberty - grateful to be in a democratic country.

In the end of the cartoon a picture is shown of Hitler angry face, which is quickly assaulted by a rotten tomato: a bold statement by Disney of their loyalty to America and opposition to Hitler (and by extension the Axis Powers).

In "Education for Death" Adolf Hitler is again depicted largely through pictures - forever watching over Nazi Germany as an unseen but all-powerful force, however this cartoon also shows Hitler himself in an Aryan fairy tale: showing the tale of Sleeping Beauty as it was told by the Nazi Party, with Hitler as the "brave" Knight.

In this scene Disney portrayed Hitler as a buffoon who ranted, raved and made a fool of himself - however for the remainder of the cartoon he was back to his usual depiction as an unseen dictator, watching over his people.

Hitler's portrait would change expression dependent on his mood in this cartoon as well, such as when the Nazi School Teacher bullied a young boy and sent him to a corner, the portrait of Hitler could be seen frowning and glaring at the boy in distaste, but the boy recants a thing he said earlier that caused the bullying and punishment, and Hitler's portrait smiled at him, looking very pleased. He even winks at the viewers after the narrated says "Nice going, eh, Adolf?"

Adolf Hitler appeared in "Reason and Emotion" that he can destroy Reason's to control by weakness to the Emotion's with Fear, Sympathy, Pride and Hate. 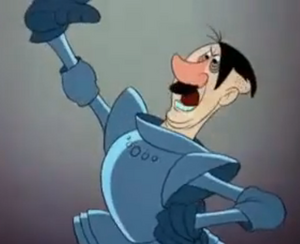 Hitler as the "brave" knight of Aryan fairytales. 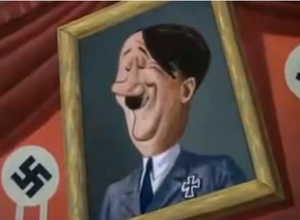 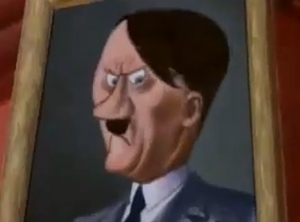