Exterminate all non-Aryan Germans (both failed).

Fictionalized Dictator
Adolf Hitler is the titular character and a major antagonist in the Doctor Who episode "Let's Kill Hitler". He was the leader of the Nazi Party and a chief instigator of World War II. As the tyrannical leader of the Nazi regime, he was the Führer of Germany during the 1930s and the 1940s.

He was portrayed by Albert Welling.

14 years later in 1903, after receiving a wealth of information from the future, Grigori Rasputin foresaw, among other things, Hitler's rise to power.

Hitler joined the Nazi Party in 1919 and became its leader in 1921. During this time, the Timewyrm, looking for a way to hurt the Seventh Doctor by destroying the planet he loved, chose Hitler as a figurehead for her plan to manipulate human history. However, she did not expect his mind to be so powerful and became trapped in it. Hitler began subconsciously accessing the Timewyrm's vast psychic powers and using them to become an even more compelling speaker.

Also during this time, the War Lords discovered Hitler's psychic abilities and decided to use him in their second attempt to conquer the universe. They set themselves up as the Black Coven and allied with him, while the War Chief, as Doctor Felix Kriegslieter, used psionic technology to boost Hitler's abilities even more.

20 years later in November 9, 1923, the Doctor and Ace witnessed Hitler leading the unsuccessful Beer Hall Putsch. The Doctor reset Hitler's dislocated shoulder and gave words of advice and encouragement to him, later explaining to the shocked Ace that it was necessary to ensure history would run its proper course. Hitler was later arrested and imprisoned, but was released the following year.

13 years later in 1936, King Edward VIII of Great Britain, Sir Oswald Mosley and Joachim von Ribbentrop planned to establish a government sympathetic to Hitler, the Players assisting von Ribbentrop and Wallis in 'encouraging' Edward to dismiss the government for not allowing him to marry Wallis, but this plan was defeated by the Sixth Doctor, Peri Brown and Winston Churchill. Peri replaced a list that von Ribbentrop had assembled of British citizens friendly to Nazis with a laundry list.

2 years later in 1938, Hitler acquired a validium bow, one of the components of Nemesis. In the same year he was almost killed prematurely by the Teselecta, only to be accidentally saved by the Eleventh Doctor when his TARDIS was out of control. After thanking the Doctor for saving him, he asked what the TARDIS was, the Doctor (who clearly resented Hitler) responded by saying it was a London Police Box and also issued Hitler with a chilling warning about his future defeat. After shooting at the robot, he was punched by Rory Williams and locked in the cupboard. A stray bullet from Hitler's gunfire struck Mels and lethally wounded her, forcing Mels to regenerate into her new appearance and identity as River Song.

Hitler invaded Austria in the same year and drove straight to Vienna to obtain the Spear of Destiny from a museum. He took the spear back to Berlin, and from then on believed that he was invincible.

1 year later in September 1939, during the German invasion of Poland, Hitler was reunited with the Doctor and Ace in Berlin and took him on as an advisor. In this capacity, the Doctor exposed the schemes of the Black Coven and Kreigsleiter, all of whom were killed in a conflict with German soldiers. The Doctor also inadvertently taught Hitler how to control the Timewyrm's power.

8 months later in May 1940, on the night of the Dunkirk evacuation, the Doctor and Ace visited Hitler for a third and final time. The Doctor banished the Timewyrm from Hitler's mind, scattering it throughout time and space. Unstable and disoriented without the entity's power, Hitler was convinced to allow the evacuation to proceed.

A piece of chronosteel was found beneath the Rhineland by the Nazis, believed by Hitler to be Thor's Hammer. A squad of Nazi soldiers led by Koenig arrived on the English coast with the Chronosteel, intending to use it as the main componant of a device that would block out British radio signals, allowing the German ships to attack without being detected. This plan was foiled by George Woods and the time travelling Clyde Langer, who retrieved the Chronosteel object.

2 years later in August 1942, the Sixth Doctor, investigating reports that Hitler might have survived his apparent death with the aid of alien technology, visited him in Berlin, accompanied by Alistair Gordon Lethbridge-Stewart. Introducing himself as Major Johann Schmidt, an army doctor, he acquired blood samples from Hitler and Eva Braun. From these, he learned that, while Hitler had indeed died as history reported, Eva had survived and been smuggled to safety while pregnant with Hitler's child.

2 years later in August 1944, while planning a raid on Turelhampton to acquire alien technology, Hitler insisted that Major Schmidt be included as part of the team.

8 years later in April 30, 1945, near the end of the war, the Doctor, Lethbridge-Stewart, Claire Aldwych and Hitler's son visited Hitler in his bunker. Hitler's son had forced the Doctor to take him back in time to meet his father. Aided by the Doctor's prior 'friendship' with him influencing his decisions, Hitler dismissed his son as a madman and shot him. Shortly afterwards, he committed suicide rather than face defeat.

In an alternative timeline in which Hitler did not lose the power of the Timewyrm, Germany conquered the United Kingdom and the rest of Europe. The Seventh Doctor and Ace, after visiting the occupied London of this timeline in May 1951, prevented it from coming to pass.

In a different alternative timeline in which Nazi Germany won World War II and eventually conquered Africa as a result of the Seventh Doctor and Ace accidentally leaving laser technology in Colditz Castle in October 1944, the Mau Mau Uprising against Nazi rule took place in Kenya in 1953 that Hitler sent in the Luftwaffe immediately. On Hitler's orders, they proceeded to carpet-bomb the tribal areas and wipe out most of the native population. Within three years, a virulent plague had broken out in Kenya which killed many German soldiers. In 1957, Hitler placed Elizabeth Klein in command of a team of medical doctors and scientists who attempted to discover the cause of the plague. However, they were unable to do so.

In 1961, Hitler died at the age of 71 or 72. Prior to his death, he had stockpiled a large number of alien artefacts including the TARDIS but had kept them contained because he had feared the implications of intelligence superior to humans.

Klein later told the Doctor that Hans de Flores was "always the Führer's favourite." She hoped that he would succeed Hitler as the Führer when the Fourth Reich was established. 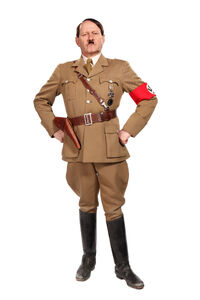 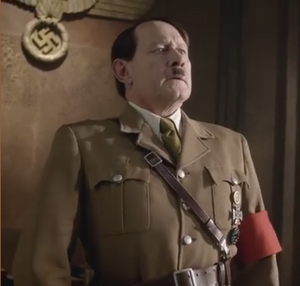