Ranting about his failed plans and the incoming German defeat of WW2.

Turn the tide of WWII.

Rebuild Berlin as Germania (both failed).
Find Fegelein.
Kill himself and his mistress and prevent their corpses from being exposed by the Russians before they take over (both succeeded).

Adolf Hitler is the main protagonist of the 2004 war film Downfall.

He is a fictionalized version of German dictator of the same name.

This version of Hitler was portrayed by the late Bruno Ganz.

Downfall depicts Hitler in his final days inside the Berlin bunker, insisting that the war will never be lost. in the bunker, Hitler is briefed on the disintegrating defenses of Berlin. Karl Koller informs him that the Russians have fired artillery 12 kilometers from the city, implying that the Red Army is mobilizing to destroy German defenses. After attending his own birthday party, which he rejects Gestapo Leader Henrich Himmler's plea to leave Berlin despite getting help from Hitler's friend Walter Hewel. He also viewed the artwork that was made from Minister of Armaments Albert Speer and tells him that he will create Germany after the war, but is suggested from Himmler's assistant Hermann Fegelein that if he does want to realize the plans, he has to leave Berlin. Later, Hitler's secretary, Traudl Junge, informs him that the Soviets have surrounded them. Hitler declares that he will face them in Berlin, or die trying. Unmoved of the news that the 9th Army has to retreat or become annihilated, he announces that Waffen SS General Felix Steiner will soon arrive and drive the Red Army out of the city. However, he is later then informed that Steiner couldn't mobilize enough men to carry out the assault to stop the Red Army advancing (since Steiner's division has been scattered to avoid artillery fire). Visibly shaken, Hitler dismisses all of his personnel except his Generals (Keitel, Jodl, Krebs, and Burgdorf), Propaganda Minister Joseph Goebbels and Reich Leader Martin Bormann.

Throwing a massive tantrum, Hitler angrily states that Steiner's attack was an order and accuses the whole German military of interfering, disobeying his orders and sabotaging his plans, calling his own soldiers "cowards, traitors, and incompetents", and that the generals are "the scum of the German people." He expresses regret at not executing the entire officer corps like Joseph Stalin did during the Great Purge and insulting the generals about their experience in the military academy to be "just to learn how to hold a knife and fork.". At last, however, Hitler sinks into his chair and acknowledges that the war is lost. "If you think that this means I'll be abandoning Berlin," he snarls, "I'd rather shoot a bullet through my head." He pledges that he will stay in Berlin to the end, even if it means killing himself. Hitler later sends Keitel to the north to recover the Romanian oil fields.

Hitler receives a telegram from his future successor, Hermann Goering, in which Goering himself asks permission to take control of the Reich, which Hitler declares to be treason. After hearing from his friend (and Johann von Ribbentrop's liaison) Hewel, about the communications about to be destroyed soon and from Goebbels perceiving that Goering wants to take the power, stating that he never liked the mob Goering assembled in Oberzalsberg, which he thinks is a coup; an infuriated Hitler rants about this and asks what Goering had done to the air force, which he thinks is enough to execute him and claims that Goering has "helped corrupt the country". Afterward, Hitler then orders Goering stripped of command and executed. He meets up with test pilot Hanna Reitsch and the wounded but recovering Robert Ritter von Greim, whom Hitler promotes to General Field Marshall and head of the air force.

Later on at dinner, Hitler finds out that Himmler offered to surrender to the Allies, which angers him, and forces them to find Fegelein, but is informed of his one of his staff and Burgdorf that they don't know where he and that no one has seen him in a few days; Hitler demands Fegelein's report immediately. He orders them to go the Doenitz's station and tell him to find Himmler. German Red Cross head and main chief of the Nazi human medical experiments, Ernst-Robert Grawitz asks Hitler permission to let him and his family leave Berlin, but Hitler refuses to give such permission to Grawitz. As Grawitz leaves, Otto Gunsche tells Hitler that Fegelein can't be found anywhere in the bunker, and due to this, he orders Fegelein to be executed. Eva tries to persuade him to spare his life, to no avail. Grawitz killed himself and his family with a pair of grenades while having dinner while Fegelein is captured and executed by Peter Hogl.

Afterwards, Hitler learns that all available reserves are out, the supplies from the air are impossible to collect, there is no ammunition to supply the military and that the Red Army has closed in 300 to 400 meters away from the Reich Chancellery (although the military is able to hold off the invading Russians for 2 days until they can retreat). Weidling suggests leaving the bunker since according to him, the Battle of Berlin has brought 20,000 causalities of their finest officers, but Hitler ignores the order to leave Berlin and states that Walter Wenck's 12th Army will stop the Russian assault. Privately, his generals agree that Wenck cannot repel the attacl because he does not have enough infantry. Despite hearing news from Keitel that Wenck has moved to Lake Schielow, the 12th Army cannot continue the attack on Berlin and that the 9th Army has been surrounded, Hitler forbids his generals to surrender.

On April 30, 1945, Hitler and longtime companion Eva Braun, whom he had married hours before, commit suicide, with Günsche standing guard. Hitler shoots himself in the head after taking cyanide pills. Their bodies are burned by his remaining troops. Goebbels, also the commander of the Volkssturm, takes his place as the Chancellor of Nazi Germany (in which Karl Doenitz becomes President), but the following day kills his wife and himself.

Although many of his generals and subordinates took up vices such as gambling, smoking and heavy drinking due to the stress of the war, Hitler stayed clean throughout his final days in the bunker.

Nonetheless, Hitler was thoroughly mentally shaken during his final days. He had poor mood and self-esteem almost all the time, pacing around the bunker looking at the ground, and taking no notice of his subordinates 'Heiling' him as he passes by. He also has this habit of putting his left hand behind his back and shaking it, thanks to Parkinson's.

As the days progressed, Hitler's temper appeared to have subsided. During the first few days whenever his generals flunked up or brought bad news, he would be quick to rant at them. During the final days of the war, he would simply stare at them, and mutter that "All is lost", proceeding to exit the room with his hand behind his back. He also has no sense of reality, stating to Robert Ritter von Greim that he has "three armies to attack in Prague in the behind" and that "has deposed a 1000 jets at his disposal". even though both plans are impossible due to the weakening economy of the Third Reich and the dwindling amount of German troops available are not enough to attack enemy forces.

Hitler has some serious health issues. He is often seen by people to be physically trembling, especially on his left hand, showing how his health has been deteriorating rapidly. He is also believed to have suffered from borderline personality disorder by a majority of psychologists and psycho-historians.

Hitler also treated the women in the bunker differently from the men. He was a lot more forgiving towards them because they didn't do anything major that might hinder the war's outcome or his image. He is especially kind to his secretary Traudl Junge, treating her like a favorite niece. 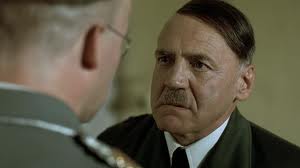 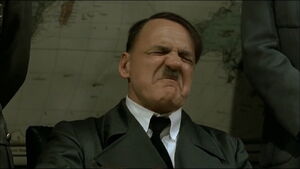 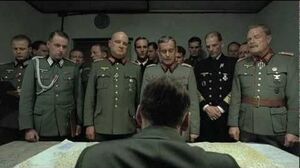