Adolf Hitler was a minor villain (yet main antagonist) in the movie Fullmetal Achemist: The Conqueror of Shamballa. He was the future dictator of Germany and founder and Führer of of the Nazi party in 1921 after he used Anton Drexler as a puppet. He tried to take political power in Germany in the hope of conquering the world.

Adolf Hitler did not do hardly any participation in the film - he did not even come to talk. However, he proved to be a cruel person who pursued and ordered the death of all gypsies in Germany and later the Jews and Communists. He was a ruthless merciless psychopath but also a great leader and had a highly intelligent brilliant but distorted mind and was insane. He was far more evil than Eckhart.

He also did not have much participation, but was directly connected with the the war that was coming to Germany. In an attempt to take Germany, he commanded a group of scientists to create a bomb with enough power to wipe out all enemy forces including the destruction of the enemy country. He was aided by Dietlinde Eckhart.

As the first order of the Chancellor of Germany he ordered the killing of gypsies that he considers them as thieves and dark magic users who were used to cause harm on the people of Germany. He had a big racism by other ethnicities, he was in favor of a Nordic ethnicity white and blond race that he considered the Aryan race.

He tried to move a military battalion in the neighboring country to get the chance to dominate more territory and a further step to conquer the world. However, the military forces of the country were warned and Hitler's plan was for the low water. After the death of Dietlinde Eckhart, the Nazi party was dissolved and Hitler was considered a fugitive for war crimes. (This was called the Beer Hall Putsch). Presumably history continued its natural course and he was captured, published his book "Mein Kampf", won the German elections and became the dictator of Germany. 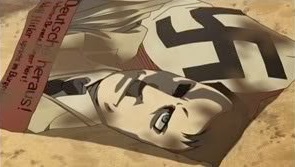 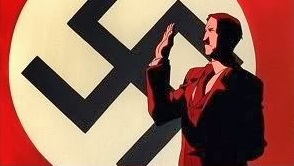 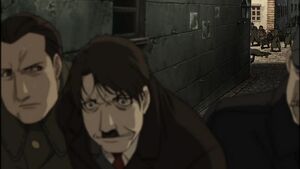 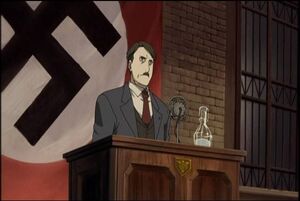 Add a photo to this gallery
Retrieved from "https://villains.fandom.com/wiki/Adolf_Hitler_(Fullmetal_Alchemist)?oldid=2709786"
Community content is available under CC-BY-SA unless otherwise noted.